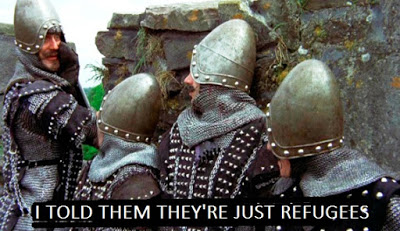 I made this comment on social media today “I am sorry, but when a quarter of a million angry and violent young men from a place and culture that hates you, show up on your doorstep, it’s not a refugee crisis, it’s an invasion.”

A kind commenter followed up with this link which I hadn’t seen, but I think you should.

Pope Francis is wrong on the migrant crisis and the wave of Muslim migrants currently sweeping Europe actually represents an “invasion”, a Hungarian Bishop has said.

Laszlo Kiss-Rigo, Bishop of Szeged-Csanad in southern Hungary, said the migrants “come here with cries of ‘Allahu Akbar.’ They want to take over.” He added that Pope Francis “doesn’t know the situation” and that many so-called refugees are actually economic migrants.

On Sunday, the Pope called on every Catholic parish across Europe to take in refugees. “Faced with the tragedy of tens of thousands of refugees who are fleeing death by war and by hunger, and who are on a path toward a hope for life, the Gospel calls us to be neighbours to the smallest and most abandoned, to give them concrete hope,” he said.

“May every parish, every religious community, every monastery, every sanctuary in Europe host a family, starting with my diocese of Rome,” he added.

However, in an interview with the Washington Post, Kiss-Rigo said the Pope was mistaken.

“They’re not refugees. This is an invasion,” he said, adding that the influx of migrants posed a threat to Europe’s “Christian, universal values.”

He also said that many of them were not deserving of help as they “have money.” They have also been leaving rubbish strewn in their wake and have refused food and water.

“Most of them behave in a way that is very arrogant and cynical,” he said