PETA: Monkey Who Took Selfie Should Own Copyrights. Sues. 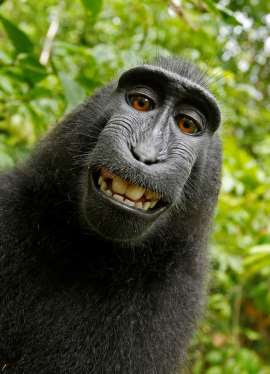 So a monkey picked up a camera and snapped a selfie. It’s a pretty awesome selfie, right? And a great story because hey, a monkey took a selfie. And you thought only the Kardashians could do it.

Naruto, a six-year-old macaque who lives free in the Tangkoko Reserve on the Indonesian island of Sulawesi, took the image and several others about four years ago using a camera left unattended by British photographer David Slater, People for the Ethical Treatment of Animals (PETA) said in the suit.

The so-called Monkey Selfies that resulted came from “a series of purposeful and voluntary actions by Naruto, unaided by Slater,” said the complaint, filed in U.S. District Court in San Francisco.

“Naruto has the right to own and benefit from the copyright … in the same manner and to the same extent as any other author,” the suit said.

Slater, the photographer is shocked by this because he is personally “sympathetic” for “animals having rights to property.” So he’s a fellow traveler. But then he added, “but in no way do I mean copyrights.”

So you’re for animals having property rights…except when you want that property?

He says he’s confused about PETA’s “attack” on him. But that’s easy. He’s a human. And he’s in the way.

PETA said it was suing on behalf of the monkey because he couldn’t “due to inaccessibility and incapacity.” Yeah, ’cause he’s a monkey.