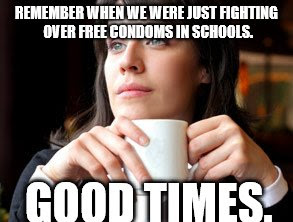 So it turns out we were underselling the apocalyptic state of things. Our bad.

Seriously. I was just taking stock and found myself wistfully recalling the days when our biggest problem (well, one of them anyway) was condoms in schools.

Think about it. In a few years we went from condoms in schools to bathroom gender anarchy mandated in all public schools.

In a few short years we went from “they just want the right to marry” to “Christians will be forced to take part in ceremonies.”

We went from “safe, legal, and rare” to anytime, anywhere and the taxpayer will pay for it.

We went from the morning after pill not being approved at all to making nuns pay for it.