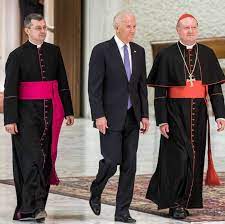 Stupid God-given rights keeps getting in the way of progress. That’s really pissing off the devoutly Catholic Joe Biden.

A U.S. District Court judge’s Aug. 9 ruling to block the Biden administration’s mandate that doctors and hospitals perform gender-transition procedures despite their own moral or medical objections is “a victory for common sense, conscience and sound medicine.”

That is the view of Luke Goodrich, vice president and senior counsel at the Becket Fund for Religious Liberty, based in Washington. He is the lead counsel for the plaintiffs in the case.

Franciscan Alliance, based in Mishawaka, Indiana, is a Catholic health care system now known as Franciscan Health that operates hospitals serving Indiana and one hospital in Illinois and employs over 18,000 full- and part-time employees. The defendant is Secretary Xavier Becerra of the U.S. Department of Health and Human Services.

On Aug. 9, Judge Reed O’Connor of the District Court for the Northern District of Texas in Wichita Falls blocked the HHS regulation — in its current form as proscribed by the Biden administration. It requires doctors to perform gender-transition procedures in children and adults or be held liable for discrimination.”

Gender reassignment is never actually necessary but the left wants to make it mandatory. The resistant of it is necessary. We should all be grateful that there are still those willing to take up the fight.