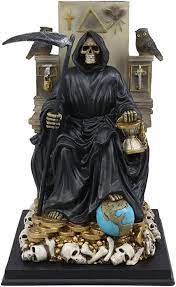 Here’s the thing about this video. I found it very interesting. This former law enforcement officer in Mexico talks about how prevalent Santa Muerte and other occult practices are in both the Mexican government and the Cartels. (Is there a difference?)

Tim Pool, who does a very good job on a great many stories, doesn’t seem to take it seriously but he should. I’m not sure he takes any religion seriously, to be honest.

But if the occult has a grip on the most powerful people in Mexico this would explain a great deal about the state of Mexico today, the drug trade, and sex slavery. It’s especially disconcerting when one realizes that the US no longer has a functioning southern border.

Worth a watch but NSFW.