The Priorities of Sonia Sotomayor are Showing. 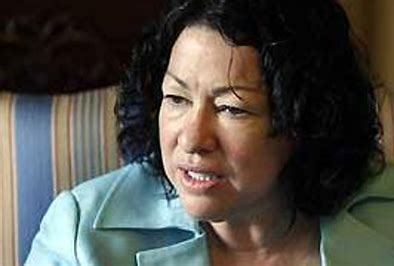 This is mind bending. Sickening.

Justice Sonia Sotomayor wondered aloud whether the legitimacy of the Supreme Court would endure if it overturned Roe v. Wade.

“Will this institution survive the stench that this creates in the public perception that the Constitution and its reading are just political acts? I don’t see how it is possible.”

Think about what she just said. Think about her priorities. We’re talking about the right of human beings to exist but she believes that is subordinate to the importance of the court that she is on. The institution is of greater importance than human rights.

Americans should be horrified by what one of the most powerful people in our country just said.

The case being heard, Dobbs v. Jackson Women’s Health Organization, could potentially overturn Roe v. Wade and Planned Parenthood v. Casey, the two linchpins of abortion-rights protections. The law, which banned most abortions after 15 weeks, was blocked by a lower court. But anti-abortion advocates hope that the new conservative majority on the Supreme Court will deliver a favorable ruling.

If Roe were to be overturned, abortion would likely become illegal in 22 states, according to the Guttmacher Institute, a pro-abortion rights research group.

Sotomayor said that state legislatures are moving forward with abortion restrictions “because we have new justices,” referring to the three appointees by former President Trump — Neil Gorsuch, Brett Kavanaugh and Amy Coney Barrett. Those appointments have shifted the balance of the court to six-to-three in favor of conservatives. Sotomayor was appointed by Barack Obama in 2009.

“If people actually believe that it’s all political, how will we survive?” Sotomayor continued, arguing that any rights, including the Second Amendment, could be in danger if the court’s legitimacy is undermined. “How will the court survive?”

Some justices have spent the last few months attempting to defend the legitimacy of the court as more than a political entity, but a September Gallup poll found record-low support for the branch. In the survey, just 40 percent of Americans said they approved of the job the court is doing, down from 49 percent in July. The poll was taken after the court declined to block a restrictive abortion law in Texas.”

You know Roberts agrees with her. He’s more worried about his “LEGACY” than human rights.

This court case in many ways decides the country we will be. Is there any hope left for an America that honors and respects human rights as coming from our Creator ? I doubt it. But I can assure you I’ll be praying.