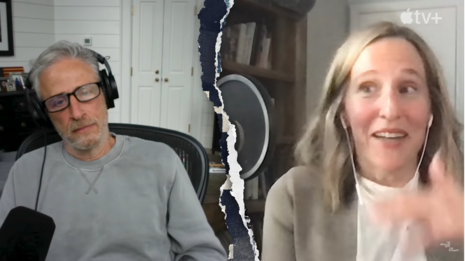 Newsbusters: “Speaking to the liberal cast of the Strict Scrutiny podcast, Stewart made his morbid prediction while admitting, “You may say I’m being crazy.” He then suggested certain states would find “the woman who’s having a baby is not as important as the potential of that life…”

And going down his warped line of reasoning, he argued the pro-life position was “to save a life, autonomy means nothing.” Thus, since “we have an organ shortage in this country” and “organ donation saves lives” they would be able to “go to a person and say ‘give me one of your kidneys because it’s going to save this person’s life.’”

University of Michigan Law School assistant professor Leah Litman, a co-host for the Strict Scrutiny podcast, built off of Stewart by claiming it would only be that way for women. “Is that person a woman or a man? Like, women, don’t have bodily autonomy. Not sure about the men’s though,” she said. “Right, the men still do,” Stewart agreed.

I first thought about explaining why this doesn’t make sense but then I remembered that these people don’t really believe what they’re saying. Truth is not a value to the left. They view Republicans as evil and themselves as good so therefore whatever they ascribe to those evil Republicans is fair game because it prevents evil people from taking power.

Their self righteousness is essentially a license to lie. And boy, do they.

When you demonize the other side, you end up acting like a demon yourself.