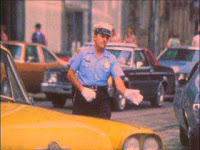 I think that anyone over the age of forty remembers Vic Cianca even if you don’t know it. Vic Cianca was that traffic directing cop from Pittsburgh who did all those crazy and entertaining moves. Cianca’s moves became famous in 1964 when Alan Funt surreptitiously filmed him for Candid Camera.

Cianca passed away January 24th at the age of 91. May he rest in peace.

What people who remember him may not know is that Vic Cianca was a man of faith, a Catholic, and his famous routine developed from the sign of the cross.

His son, the Rev. Vic Cianca, vicar general of Assyrian Church of the East, said his dad’s unique style of using his whole body to direct traffic came naturally.

“We’re Italian, and we’re very Catholic,” he said. “Dad would always make the sign of the cross whenever there was a problem. He’d do the same thing while directing traffic.”

That simple sign of the cross evolved into a far more involved — and entertaining — act played out every rush hour on Downtown streets. Cianca recalled watching his dad work busy intersections, waiting for crowds to gather, and then proudly telling onlookers: “That’s my dad.”

Cianca is great example of how we can bring the joy of our faith to our work, no matter what it is.