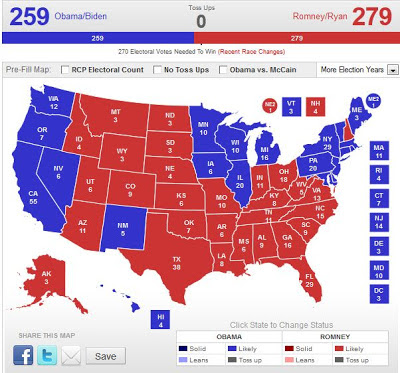 Don’t get me wrong, I am nervous as all get out in this election. I find it unbelievable that this election is so closely contested. Alas alack.

There is every indication that Republican voter enthusiasm nationally and even in Ohio is up and Democrat enthusiasm down. I think that will negate much the edge that Democrats enjoyed last time around and I expect that Republicans will come close to nullifying that advantage altogether.

So with base turnout a wash, it comes down to independents. In just about every poll for the last month, even the ones that show Obama ahead, show Romney leading among independents and not by just a little. On average Romney’s advantage among I’s has been 8-11%. This is enough to give Romney a win even with a D+ turnout.

And lastly, the incumbent Obama has been at 47-48% in almost all the polls. This is likely close to the number that he will get on election day. My guess is that Obama comes away with 48.5% of the vote.

Electorally that is enough but I also think that Wisconsin is a tossup, Iowa is a longshot, and that Michigan and Pennsylvania are a pipe dream.