“Abort Him, He Has No Chance” Baby Goes Home! 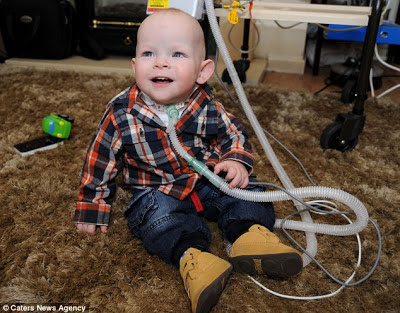 Abort him, the Doctors said, he has NO chance at survival.

Mom, didn’t listen to the culture of death and her son, the one with NO CHANCE of survival, just went home from the hospital.

A mother who was told by doctors that her unborn son was so ill she should have an abortion is celebrating after her baby boy has made a miracle recovery – and come home from hospital for the first time.

Jade Clarke ignored doctors who told her that her baby had ‘no chance’ of survival, and refused to terminate her pregnancy,

Riley was born with his heart on the wrong side of his body, disconnected valves, and twisted bowels – and Jade was assigned a bereavement midwife.

But after more than a year of medics battling to save baby Riley, the 17-month-old tot has finally left hospital for good – and has gone home to live with Jade and dad Rikki for the first time.

Jade, 22, from Barnsley, Yorkshire, said: ‘Doctors told me time and time again that Riley would have no chance, and I should consider an abortion.

‘But he’s an angel sent from above. He’s my first child and I just felt I wanted to keep him.’