The Pope Accepted What?!?! Updated Again! Pope Wearing It Too! 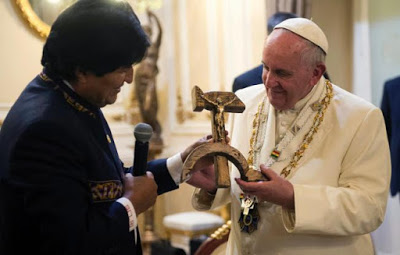 Shaking my head. What could the Pope possibly be thinking? Below, see an image of the Pope smilingly accepting a gift from the Bolivian Socialist leader of a crucifix in the form of a hammer and sickle.

A hammer and friggin sickle. The symbol of godless and murderous communism for heaven’s sake.

This is inappropriate no matter how you look at it.

Update: It seems that during the presentation of this blasphemous crucifix, the Pope very quietly said “”No está bien eso” / “This is not right.” before smilingly accepting the gift.  The Pope should have refused it altogether in my opinion or even smashed it to a million pieces, but at least he recognized it wasn’t right, even if the picture that everyone will see does not.

Update II: “In addition, he delivered the carving of a cross formed with the hammer and sickle, which is a reproduction of one that made ​​the Spanish Jesuit priest Espinal , murdered in 1980 by paramilitaries for their commitment to social struggles in Bolivia, whom Francisco dedicated a tribute near the spot where they found his body.

Update III:  Back to being worser!!  The Pope is actually wearing the same symbol around his neck.

The whispered remark can be seen at the 45 second mark of this video of the presentation.