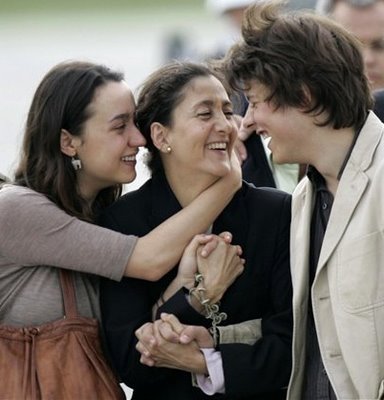 Ingrid Betancourt returned to France yesterday after her amazing rescue after six years of captivity in the jungles of Columbia. Betancourt says that her faith and the Virgin Mary sustained her throughout the horrible ordeal.

[NYT] In comments to Europe 1 radio, she said that her captors had chained her day and night for the first three years, but that she was sustained by her Roman Catholic faith and thoughts of her family. “I was in chains all the time, 24 hours a day, for three years,” she said. “I tried to wear those chains with dignity, even if I felt that it was unbearable.”

Asked if she had been tortured, she said, “Yes, yes,” and said her captors had fallen into “diabolical behavior,” adding, “It was so monstrous I think they themselves were disgusted.” She called her rescue “a miracle of the Virgin Mary” and said, “You need tremendous spirituality to stop yourself falling into the abyss.” She had made herself a wooden rosary in the jungle, she said.

President Sarkozy is basking in the joy and triumph of Betancourt’s rescue. Who could blame him? Well, as it turns out, his sore loser ex-presidential rival Ségolène Royal who said in an interview during a visit to Canada. “Nicolas Sarkozy had absolutely nothing to do with this liberation.” Sour grapes and bad politics.

Beyond such unctuous politics, there is another head of state that may deserve substantial credit for the miraculous rescue. This comes to us via Sheila Liaugminas.

On Latin American affairs, I often turn to my good friend Alejandro Bermudez, the editor-in-chief of ACI Prensa and its sister, Catholic News Agency. He’s always extremely knowledgeable and informative. Over the past day, I’ve asked him questions about this story, and his reply was startling.

He said great merit should go to President Uribe. “He has been praying the Rosary from the presidential palace on public radio every Thursday, bringing in famous guests, including once the president of Peru.” Imagine that. “A president praying the rosary on public radio. That’s one of the most under covered news” items, said Alejandro. But look for good coverage of it in the next few days on Catholic News Agency.

What an incredible story. May God bless Ingrid Betancourt and may God bless President Uribe.