I continue to find the story of Ingrid Betancourt utterly compelling.

There are so many aspects to it. Her capture, her torture, 6 years as a prisoner in the jungle, the faith that sustained her, her amazing rescue. Amazing, all of it.But the story did not end with her rescue.

One of the most compelling and mysterious aspects of this story happened after her rescue. One can certainly marvel at her endurance, her survival, and the rescue. But these are things you can understand. Extraordinary circumstances, for sure, but understandable human events. Tangible. But another facet of the story reveals the intangible and the truly miraculous.

[BBC]The helicopters arrived and surreal characters came out… men dressed with logos that certified them to be delegates of I don’t know what. I looked and I thought: and these guys? … What kind of international committee is this?

They closed the helicopter’s doors and I saw the commander who for four years had been in charge of us, who had been cruel, humiliating and despotic so many times. I saw him on the floor, naked, blindfolded. I don’t think I felt happiness, but rather pity, but I thanked God that I was with people who respect other people’s lives, even when they are enemies.

She looked upon the man who had been her captor on the floor, naked, and blindfolded. But the understandable anger, rage, or thirst for revenge was absent. In its place was pity, mercy, and forgiveness.

The ability to endure and try to survive is a human trait, albeit it a remarkable one when tested in such incredible and horrific circumstances, but human. Understandable. Tangible. Mercy, pity, forgiveness. These traits are not from us. They reveal the truly amazing and mysterious. Forgiveness such as this is beyond the human experience. It raises the hair on the neck like some passing spectre, felt but not seen. How can it be? Where does it come from?

What humanism this expresses. How many people would, understandably, feel utter revulsion for this torturer, or want to strike back somehow for all the pain and humiliation he had caused for so long? This immediate sense of pity and respect for another human life is, as I’ve said below, from a transcendent power, the God to whom Ingrid Betancourt continually gives thanks. Informed by her Roman Catholic faith that strongly upholds the sanctity of every human life.

The hope and the eventual forgiveness shown by Ingrid Betancourt is what is ultimately compelling about the story. We are left with those hairs on the back of the neck raised, wondering. Where do such things come from? Ingrid Betancourt answers this question with something she made out of scraps she held on to in the jungle which helped her nurture the thing we can barely understand. 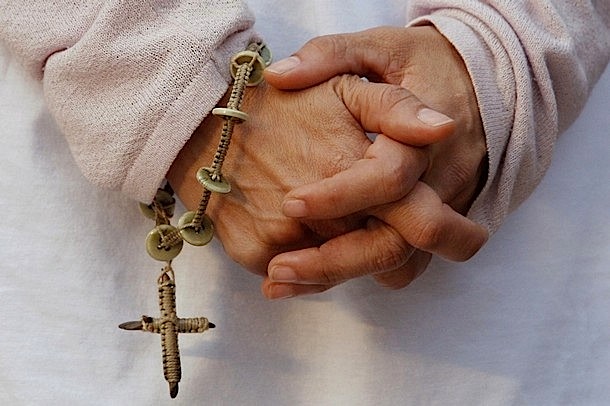