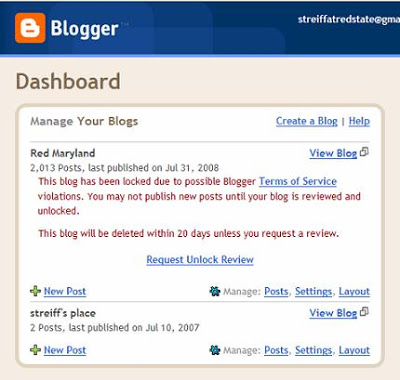 I’ve read many Catholic blogs recently which have had numerous negative comments concerning the candidacy of Barack Obama. Well if you use “Blogger” which many of you do, you too could be shut down for absolutely no reason at all. (Blogger was bought by Google in 2003.) Read this from a blogger from Maryland:

Some of you probably know that I live in Maryland. I’m the proprietor of the group blog RedMaryland which fights a daily rearguard action against the forces of corruption and socialism in the UnFree State.

Imagine my surprise to get a notification from Google that I’m running a spam blog and my blog has been locked.

We aren’t at a loss for suspects on how this came about. And we’re fairly confident that we’ll have the problem solved when Google decides it is convenient to do so.

One of the unfortunate facts of life on the internet is that Google is a law unto itself. The corollary to this law is that Google is a hotbed of slobbering lefties…and anyone who’s tried to post an anti-Obama YouTube clip can tell you. As this incident shows you don’t have to violate terms of service for them to screw with you, all you have to do is… is…. use their service.

Remember, Google allowed the communist Chinese government to have the search engine block “objectionable” search terms such as “democracy.”

Google has ignored many patriotic American holidays such as Memorial Day and Veterans Day many times while acknowledging an accomplishment of the communist Soviet Union which launched the Sputnik space satellite 50 years ago.

Here’s the thing, as this election cycle gets heated up and Catholic bloggers are invariably going to have some negative things to say about Obama and his anti-life stances, we should watch out for Google.

In case, you think that the threat is overblown, even the New York Times ran a piece on this last month:

Did Google use its network of online services to silence critics of Barack Obama? That was the question buzzing on a corner of the blogosphere over the last few days, after several anti-Obama bloggers were unable to update their sites, which are hosted on Google’s Blogger service.
The bloggers in question, most of them supporters of Senator Hillary Rodham Clinton, and all of them opposed to Senator Obama, received a notice from Google last week saying that their sites had been identified as potential “spam” blogs. “You will not be able to publish posts to your blog until we review your site and confirm that it is not a spam blog,” the Google e-mail read.

This is just 21st century censorship. Plain and simple. So just keep your eyes and ears open. Just to tempt fate a little bit, here’s a clip we at CMR made concerning Obama.

Update: The evidence thus far lends itself to the conclusion that someone is abusing the blogger spam indicator in a targeted effort against Catholic or conservative blogs. See Story Here.