The La Crosse Guadalupe Shrine and What it Means 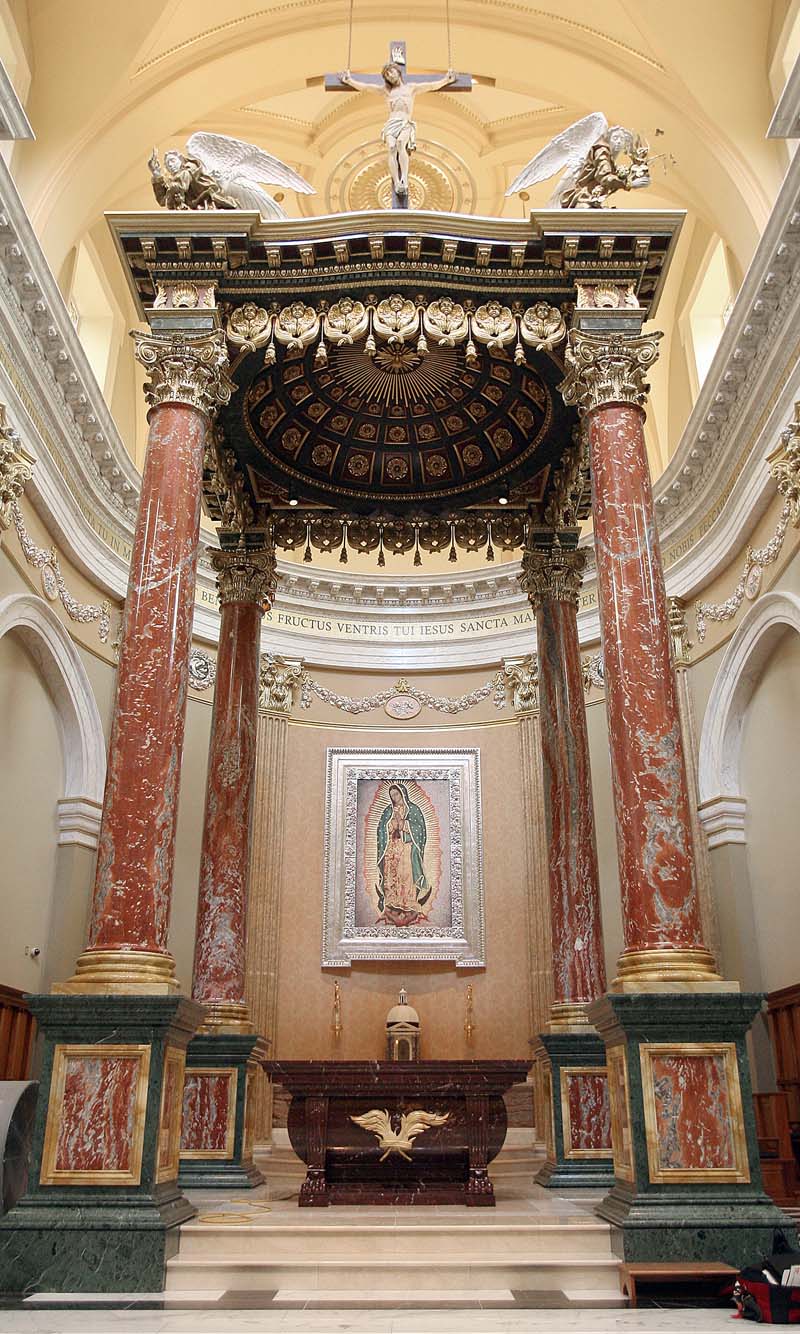 I’ve noticed a few blogs have posted some of the beautiful photos from the LaCrosse Tribune’s coverage of the new Shrine of Our Lady of Guadalupe dedicated recently by Archbishop Burke. Most of the comments about the building are quite positive, as they should be. The faithful have an innate desire for Beauty with its completeness, order and clarity, and architecture like this comes as a long cool drink in the desert of liturgical beauty in the last few decades.

But this building is much more than a pretty haven for people who like old things. This is a direct attack on the tyranny of the Zeitgeist theory of cultural evolution, and proves that the Modernist stranglehold on architectural thinking is no longer only sick, but, in fact, dead. The Zeitgeist (the “spirit of the age”) was the favorite bludgeoning stick of Modernist architects, who claimed that architecture must be “of its age” in order to be valid. And the “age,” they said, was defined by industry, engineering and mass production. Houses were “machines for living in.” Churches were banished. Leading Modernist architect Le Corbusier wrote that civilizations advance when they “pass through the age of the solider and the priest and achieve what is rightly called culture.”

See the real issue here in Modernist architecture? It’s not really about architecture. It’s about a competing theory of the world where culture is understood as secular, atheistic, rationalist and mechanistic. “Old” architecture supposedly represented a time when society was sacred, Godly, spiritual, and humanistic. To do the “old” in architecture was to claim the validity of the “old” culture with all of its spiritual and philosophical presuppositions. To build anything other than the “engineer’s aesthetic” was to thwart the development of secular culture, or as the Modernists argued, the development of culture itself. This is why traditional architecture makes Modernist architects livid.

Sure, there are still architects out there devolving into greater and greater chaos and anarchy with “blob” architecture (really) and the hopelessness of Deconstruction, beating the dead horse of the Zeitgeist. Modernists still run the museums, the big architectural firms, the architectural journals and many avenues of power in Catholic chanceries. But they are growing weaker and weaker. The modernist cathedrals of recent years will no doubt be looked upon by future historians as the strange last gasp of “Modern” architecture in a period which has already been “postmodern” for nearly 40 years. How ironic that even if one accepts the premises of the Zeitgeist, the age has become “postmodern” and the architects are still “modern”!

The Shrine of Our Lady of Guadalupe proves that the Zeitgeist argument is a fallacy. We built it in our time, so it is of our time. Period. The bizarre and wrong-headed theories of secular radicals have been debunked. God still reigns on his throne, angels and saints still sing his praises in heaven, the Spirit still inspires new saints, and humans still adore their Lord and receive divine life by eating his Flesh and drinking his Blood. The Truth of the Faith always outlives the truth of all human inner-worldly theories. Truth and Beauty are like a beach ball in the ocean; you can push it under water for a while, but it will always resurface beacuse it is in its nature to do so. Try as we might to deny God, Beauty, Truth and Goodness keep coming back, calling us to rediscover them afresh in our own time.

Is the Guadalupe Shrine a perfect artistic achievement? No. There are certainly small things that critics can point out to urge improvement in the future. But is the Guadalupe Shrine a momentous achievement? Yes, and yes indeed. Quite simply, it is the first large-scale church since Vatican II which articulately and fully proclaims itself to be a church rooted in the deep tradition, from the beautiful details in the custom-designed pews which are so vastly superior to the usual stock of catalogue-ordered type, to the sacristy which is understood as a chapel with beautiful finishes and design rather than a large closet as in most new churches. The altar reads as altar, table and tomb, proclaiming the theological richness of this object which sacramentally “is” Christ. The baldachino is a virtuoso piece of design and a stunning work of craftsmanship, bringing together the bishop, architect, historian, theologian, donor and the craftsman to their liturgical end. The flooring proclaims that it sacramentally represents the streets of the heavenly city. The saints in the side chapels prove to us that the Church goes on proclaiming the virtuous deeds inspired by the Holy Spirit in our own day and on our own American soil. The interior is flooded with light even as there are no eye-level windows giving views to the outside world, and for good reason. The interior of a church is not simply a human gathering hall, but a sacramental image of the world redeemed and glorified, where heaven, earth, God, saints, angels and humans coexist in harmony once again– all while illuminated by the light of Christ.

This building is not about the Zeitgeist at work in our world, some anonymous spirit of an “age” which has no real identity. It is evidence of the Heilige Geist (Holy Spirit) at work in our world today as always, the Spirit of love which binds the Father who created us and the Son who redeemed us. This is the true Spirit of our age as it is of every age, as it was in the beginning, is now, and will be forever.