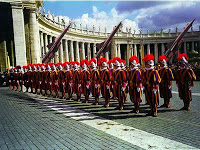 Dateline Vatican – In a truly stunning development, the Vatican today announced that it has begun development on its own nuclear program.

A Vatican spokesman today announced that the Vatican is currently operating 3,000 centrifuges within the confines of Vatican City as part of an effort to develop nuclear power. Monsignor TJ Kong said, “It is important that the Vatican becomes energy independent. This is, of course, entirely for peaceful purposes. However if we decided to develop nuclear weapons that would be our right. But at this time, Project Holy Fire is entirely peaceful in nature.”

Leaders across the world were shocked by the announcement of Project Holy Fire and are left wondering whether Vatican scientists have the technology to develop a nuclear weapon. A high ranking EU official speaking on the condition of anonymity says they do. “Remember, the Church invented modern science and who knows what kind of information they have in those Vatican archives?”

International reaction was swift. While the Obama administration had previously shown little respect to the little City State, (championing abortion on demand, forcing the removal of Christian symbols before speaking at Catholic Universities, attempting to remove freedom of conscience for Catholic health care workers and adoption agencies, funding the destruction of embryos, and repeatedly trying to nominate a pro-choice ambassador) it seems to have its attention now.

In a hastily convened televised address to the Vatican, president Obama said:

Today I want to extend my very best wishes to all who have just celebrated Easter at the Vatican and around the world. This holiday is both an ancient ritual and a moment of renewal, and I hope that you enjoy this special time of year with friends and family.

In particular, I would like to speak directly to the people and leaders of the Vatican City State. Easter is just one part of your great and celebrated culture. Over many centuries your art, your music, your crusades and inquisition have made the world a better and more beautiful place.

Here in the United States our own communities have been enhanced by the contributions of Vatican Americans. We know that you are a great civilization, and your accomplishments have earned the respect of the United States and the world.

I know that too often in the past during previous administrations, the United States has acted in a heavy handed way toward toward the concerns of Vaticanites. Those days are over.

In order to show my new found respect for the Vatican and all her people I announce today that I am canceling my speech at Notre Dame. I didn’t really want to do it in the first place but David Axelrod thought it was a good idea. In addition, if I do speak at another Catholic institution I will no longer require the removal of any Christian symbols. Now that I know that the Vatican is going rogue, all pre-conditions to dialogue are dropped.

I hope you will respond to my gesture of good will in kind. Perhaps by dropping your opposition to condoms or women priests, but this is not a pre-condition of dialogue. I fully intend to keep making concessions as long as you hate us. Thank you and as they say in the great Vatican language “Sursum Corda.”