In the interest of full disclosure, I am a Star Trek fan but not a fanboy. I enjoyed the original series when it was in reruns during the 70’s. I was an occasional watcher of the later series’ but never a full time devotee. Lastly, I admit that I have seen all the previous movies, odds and evens.

I tell you this because watching a Star Trek movie is all about history, your history with the series and movies, the characters history, and your familiarity with the world in which they live. Until now.

Ironically, this latest iteration of the Star Trek series is all about history — and undoing it. This is true of the plot of the movie in which the villain is an angry revenge seeking Romulan (played by Eric Bana) who, by traveling through time, seeks to alter history. By doing so, we know right from the beginning that this movie will be different. 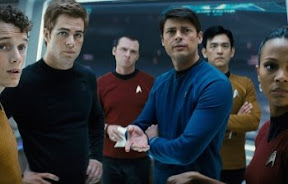 It is in this altered world that we are introduced to the characters that we thought we knew. Director JJ Abrams uses this mechanism to reinvent the history of all the characters, yet they seem guided by fate to assume their proper roles.

Why does this matter? By changing history Abrams is able to tell us their history in a way that is fresh to both trekkie and non-trekkie alike. This results in a movie that is accessible to everyone.

Early in the film we see the birth of James T. Kirk through the action and chaos that surrounds him. In his youth, as can be seen in the trailer for the film, we see his nature through a wild car chase. And it is in action, a fight actually, that he first led to consider joining Starfleet.

It is at Starfleet academy that we begin to meet the other characters with which we are familiar. In all, their main character traits are there but the characters are their own and in no way imitations of the actors who previously portrayed them. This is most remarkable in the character of Leonard ‘Bones’ McCoy who is portrayed by Kiwi Karl Urban. Urban does a remarkable job of picking up many of the mannerisms of the original actor DeForest Kelley, but without resorting to imitation. It is a tightrope walk that he handles magnificently and his performance stands out as a result.

Chris Pine plays Jim Kirk with all the same swagger as William Shatner but without any of the ticks. Pine’s Kirk is a brash and arrogant young officer. It is his brashness and arrogance that are always simultaneously his best and worst qualities. Zachary Quinto’s Spock is also well done. He looks remarkably like a young Leonard Nimoy and does a good job of barely concealing the emotion that rages inside of the half Vulcan/half human.

Abrams does a good job of handling history and character development in what is otherwise non-stop action. It is worth noting that this movie is actually very funny along the way with humorous quips laced throughout each action sequence.

The movie is violent but filmed in a such a fast paced way that it never dwells on it. Most of the violence is on such a grand scale that it does not overwhelm. Kirk’s womanizing is established in the film through a brief sequence of sexual innuendo and with two female characters in their underwear. This makes the movie unsuitable for younger viewers as does the use of a few profanities.

Overall, this movie is an enjoyable roller coaster ride that will appeal to anyone who likes action films, regardless of your history with the franchise.