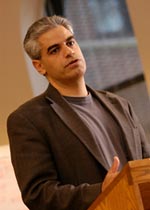 Here you have it folks, your new ambassador to the Vatican.

WASHINGTON (AP) — A Hispanic Roman Catholic theologian who advised Barack Obama’s presidential campaign is the Obama administration’s choice to serve as U.S. ambassador to the Vatican.

The White House announced Wednesday it plans to nominate Miguel H. Diaz, an associate professor of theology at the College of Saint Benedict and Saint John’s University in Collegeville, Minn., for the post.

Diaz, 45, a Cuban-American, was a member of the Obama campaign’s Catholic advisory board. Diaz was among 26 Catholics who signed a statement supporting the nomination of Health and Human Services Secretary Kathleen Sebelius, a Catholic whose support for abortion rights was criticized by conservative Catholics.

Diaz, while ostensibly pro-life, has been a vocal supporter of Obama and Sebelius. AP continues.

In an interview with Catholic News Service at Obama’s inauguration, Diaz said he was looking forward “to moving beyond the politics of fear to the politics of hope.” He said Obama was “committed to working” with people who defend “life in the womb” and deeply respects people who hold positions he does not agree with.

“Wherever we can, we should advance life at all stages,” Diaz said.

Reached at his home Wednesday, Diaz read a brief statement expressing gratitude for the opportunity and saying, “I wish to be a diplomatic bridge between our nation and the Holy See, and if confirmed by the U.S. Senate, I will continue the work of my predecessors and build on 25 years of excellent relations with the Holy See.”

He declined to answer questions about his positions on issues, saying it would be inappropriate before his confirmation hearing.

President Obama continues to build his Vichy Catholic government that pretends to be against abortion while supporting those who support it.

Update II: The Cardinal Newman Society President Patrick J. Reilly had this to say about Diaz and a number of other Catholic professors when they supported pro-abortion Kathleen Sebelius:

“These professors are giving comfort and aid to those whose stated goals are to advance policies directly opposed to Catholic teachings on life issues, and they do it under the guise of fidelity to Jesus Christ.”

So they weren’t crazy about Diaz sounding off as a college professor, I can’t imagine what they’ll say about his new appointment.