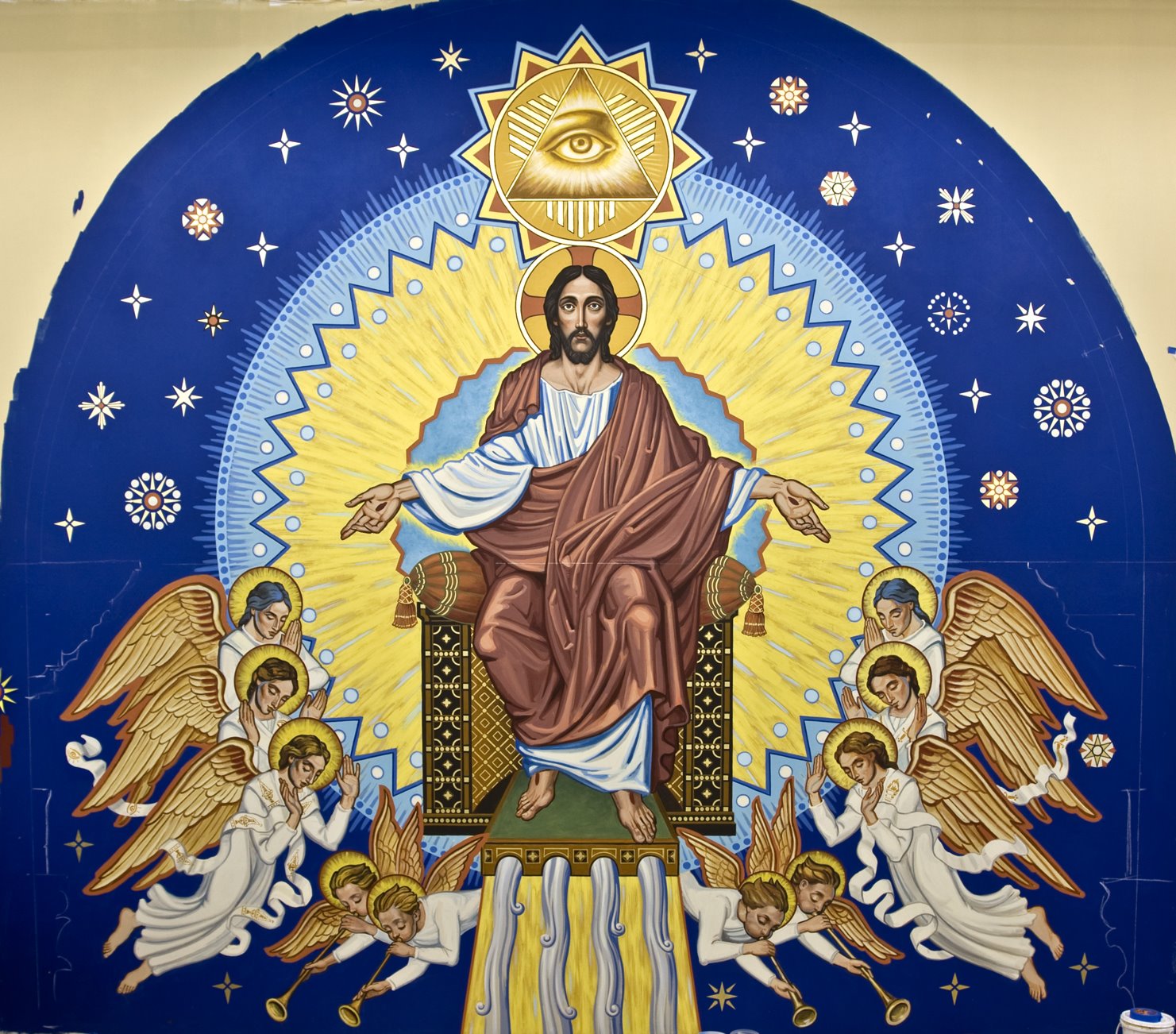 The new Church of Saint Micheal the Archangel in Leawood, Kansas will be dedicated on Saturday June 13, and many of its features have been chronicled here on CMR. The church is clearly part of the “New Classicism” movement which has been growing over the last 20 years or so, mostly in secular buildings. But one of the things that sets the new St. Michael church apart from other new churches is its decidedly eschatological orientation, that is, its look toward the end of time when the application of Christ’s victory is complete. This notion of “turning toward” the Lord’s Second Coming has traditionally been the justification for the eastward orientation of churches and the ad orientem position of the celebrant, and the source for what that Second Coming might look like has always been the Book of Revelation.
At the new St. Michael Church, the rear wall of the sanctuary is filled with a triumphal-arch like reredos in which will be placed three paintings, all by EverGreene Studios of New York (shown here in the studio in process and below before installation in two pieces–click for larger views).
The central piece is a 24 foot tall great image of Christ reigning on the throne surrounded by angels and saints described in Revelation chapter 4 and the river of the water of life flowing from the throne in chapter 22. The great eye of the Father who sees and knows all is shown sharing an intersecting halo with Christ who reigns in glory despite his wounds. The night sky reveals the heavens filled with glorified stars, praising God by obeying His will.
From below the throne flows the water symbolizing the Holy Spirit, the water of life (grace) which transforms the world. The water flows down inside the golden walls of the Heavenly Jerusalem, then upon the earth to transform it with grace. In the Leawood mural, the waters flow straight down behind St. Michael, the patron of the parish, than across the many saints, around the altar of reservation, to the sanctuary below. St. Michael is shown in the time after he has slayed the dragon, and he holds in his hands a scale representing the judgment of souls. (The saved soul “weighs” more than the damned). The parish chose the blesseds and saints for the mural, emphasizing the saints of the Americas and the 20th century like the Jesuit martyrs, Kiri Tekakwitha, Mother Cabrini, Mother Seton, Kathrine Drexel and Miguel Pro.
Interesting to note is two intersections of the heavenly world with the earthly. The “streets” of heaven in the mural have the same pattern of marbles as does the actual floor of the church, symbolizing that the earthly church building is indeed a sacrament of heaven. Second, a close look at the mural shows that among the buildings of heaven is a glorified version of Kansas City’s Power and Light Building, a landmark of the downtown skyline. This building was added to remind worshippers that the end of time will not sweep us away to some Platonic other world on clouds, but will restore and renew the real, physical world.
In the small roundrels to either side of the central panel will be placed images of Old Testament figures: Elijah and Moses on the right and Abraham and Sarah on the left. Though they appear in separate openings, all three of the paintings share the same background, suggesting that the triumphal arch is not so much fixed to the wall as it is an opening to the heavenly realm.
Notice how different this sort of iconography is from the usual arrangement of “Mary on one side, Joseph on the other, and a crucifix in the middle.” Here we see the Trinity, angels, saints, and creation being joined by the earthly worshippers to praise God and receive Christ-life in the sacraments. By looking at the heavenly glory as well as receiving the heavenly food, the process of divinization is emphasized as a full liturgical event.