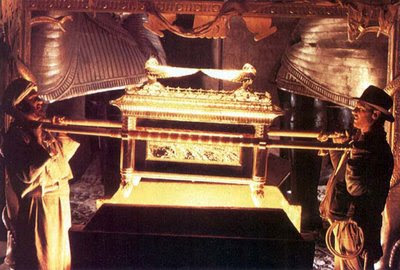 The patriarch of the Orthodox Church of Ethiopia says he will announce to the world Friday the unveiling of the Ark of the Covenant, perhaps the world’s most prized archaeological and spiritual artifact, which he says has been hidden away in a church in his country for millennia, according to the Italian news agency Adnkronos.

Abuna Pauolos, in Italy for a meeting with Pope Benedict XVI this week, told the news agency, “Soon the world will be able to admire the Ark of the Covenant described in the Bible as the container of the tablets of the law that God delivered to Moses and the center of searches and studies for centuries.”

I guess President Obama hasn’t visited the partiarch and given him DVD’s of old American movies like he did Gordon Brown. So, at the risk of spoiling the end of Raiders for the patriarch I’ll say the ending. When they open up the Ark, EVERYONE MELTS AND DIES!!!!!!!!!!!!!!!!!!!!!!!!!!!!!

Oh No, There Is A Cosmic Blob In My Pants

OK. Ready for the scariest headline ever. I’m serious. I don’t even know what it means but this is apocalyptic if I’ve ever heard apocalyptic. Ready? OK. I warned you. Here it is from New Scientist: “Gluttonous black holes power ancient cosmic ‘blobs.'”

A regular old ancient cosmic blob is bad enough but one that powers up on gluttonous black holes is seriously bad. I mean, what chance does a short chubby bearded guy like me or any of us have against something like that?

But remember -and this is important – if we’re ever attacked by an ancient cosmic blob the first order of business is to keep it away from any gluttonous black holes. Remember. If you’re reading this you are the resistance.

According to the New York Times:

The White House is bugged!

No, not like that. But actual flies are swarming the place, confounding housekeepers, irritating aides, even trying to feast on the president. During an East Room interview with John Harwood for CNBC and The New York Times on Tuesday, a giant fly orbited Mr. Obama’s head.

Do I even have to say the Lord of the Flies joke or is it implicit?

First unambiguous evidence for shorelines on the surface of Mars, say researchers.

So we have a lake but still no martians? Now, it’s just a matter of time before we start hearing about a lake monster on Mars. And the lake monster might have some answering to do on where all the martians went.

I think it’s long past time we nuked Ogopogo and Nessie. Just to make sure.

Military Covering Up Fireballs From Space.

For 15 years, scientists have benefited from data gleaned by U.S. classified satellites of natural fireball events in Earth’s atmosphere — but no longer.

A recent U.S. military policy decision now explicitly states that observations by hush-hush government spacecraft of incoming bolides and fireballs are classified secret and are not to be released, SPACE.com has learned.

The upshot: Space rocks that explode in the atmosphere are now classified.

I suspect that the government knows that an ancient cosmic blob is already on the way and they don’t want us to know about it so they can maybe cut some kind of deal.

And just in case you think this kind of coverup by the government has no real effect on our lives. Well you haven’t spoken to this kid…

Space.com: “>Space.com reports that a meteorite traveled thousands and thousands of miles in space, burned through the atmosphere at hundreds of miles per hour and crashed into Earth hitting a young 14 year old boy. Now, thankfully, the meteorite was the size of a pea and just knocked the boy down:

A 14-year old German boy was hit in the hand by a pea-sized meteorite that scared the bejeezus out of him and left a scar.

“When it hit me it knocked me flying and then was still going fast enough to bury itself into the road,” Gerrit Blank said in a newspaper account. Astronomers have analyzed the object and conclude it was indeed a natural object from space, The Telegraph reports.

Some scientists are skeptical of the claim. They fear it might be Global Warming induced hysteria.

So we’ve got fireball conspiracies and ancient cosmic blobs and this is how humanity is spending its time:

The Welsh city was turned blue as a group of 2,510 people, the majority of whom were students from the local university, crammed into the Oceana nightclub to almost double the previous record.

The event was organised by UK fancy dress costume seller Jokers’ Masquerade and was not verified until 1am as every “Smurf” had to be checked to make sure no natural skin was showing.

The record was previously held by the town of Castleblayney in County Monaghan, Ireland, which recorded 1,253 Smurfs gathered in the high street last year.

“There have been five attempts over the last 18 months, with Swansea trumping Castleblayney’s 1,253 Smurfs recorded last year.

“We knew that if we were going to break the record, we had to do it in style and 2,510 Smurfs will be a tough act to follow for any budding record-breakers.”

Sadly, someone will likely try.