School Gym Gets a Heavenly Focus 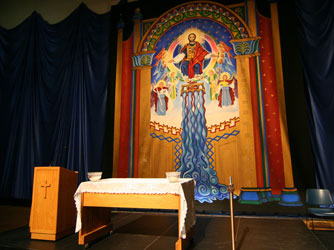 I’m happy to say that a young priest, friend and student of mine, a graduate of the Liturgical Institute, has helped teachers and students in his high school give their “gym Mass” an eschatological orientation. When a committee decided that they needed to do something about decorating for the all school Mass held in the gym, instead of simply tossing banners around or hanging long streamers, they worked on a large mural based on the eschatological orientation of the Mass as understood in the Book of Revelation. It’s a great lesson on what can be done on the local level with inspiration from the great mural at the cathedral in Wheeling, West Virginia and the new mural in the Church of Saint Michael the Archangel in Kansas. It seems like Catholic liturgy, little by little, is getting the eschatological orientation that Vatican II asked for. I particularly like the principal’s statement that it “took the students’ breath away.” This is exactly the theological description of the ecstasy which follows the experience of Beauty. One is drawn out of self and engages supernatural realities through the sacramental medium of art. Bravo to Xavier College Prep in Phoenix and may in be a beacon for “gym Masses” all around the country!

From the Catholic Sun, the diocesan paper of Phoenix, Arizona:

When students return to Xavier College Preparatory each year, they expect to be greeted by some new teachers, new books and new classes. This year, they were also met by some new religious art.

Ruth Ristow, who works in the school’s theater department, painted a 24-foot-by-16-foot canvas depiction of Christ in the Book of Revelation which will hang behind the altar at all school Masses. Fr. John Muir, chaplain at Xavier, approached Ristow with the ambitious project when she was helping him decorate his office before the school year.

“I spontaneously said, ‘Can you by any chance paint? I wonder if we could make a huge altar mural for Mass,’” Fr. Muir said. “We looked at sacred images from a few cathedrals, and the project just took off.”

Ristow had never worked on a project this large before. Another challenge was the fact that Ristow is not Catholic, and was unfamiliar with a lot of Catholic symbolism. “It was a new genre for me,” she said. “I’ve never done anything this intense with sacred art where we studied historic pieces like Byzantine art and mosaics. I’d sketch ideas out and bring them to Fr. Muir.”

For his part, Fr. Muir would make suggestions and teach Ristow about the connection between Mass and the Book of Revelation, which was the source material for the mural. In the middle of the painting sits Christ on His heavenly throne, surrounded by angels. “Flowing from the throne is the ‘river of life-giving water, sparkling like crystal,’” Fr. Muir quoted Revelation. “This river flows down to where the earthly altar is — the place where Christ pours forth His risen life on His Church.” In the mural, Christ is wearing the white linen garment of the heavenly Son of Man from the book of Daniel, which is also how He appeared during the Transfiguration, Fr. Muir said.

On top of the white garment, Christ wears a blue garment symbolizing His divine nature and red garment symbolizing His human nature. He is also wearing the breastplate of the Jewish high priests, “to symbolize that He is the eternal high priest Who has entered the heavenly temple to offer an eternal sacrifice,” Fr. Muir said. Other aspects of the faith are woven into the painting, including the Blessed Trinity, the “tree of life” mentioned in Revelation, and the “sea of glass,” also mentioned in Revelation, which symbolizes “the passage through the water of baptism that ushers one into the new creation inaugurated by Christ,” he said.

“The mural provides direction for the students’ prayer,” Fr. Muir said. “It will help, I hope, the students at Xavier to participate at Mass by reminding them what it is they are invited to participate in: the invisible mystery of Christ’s work of redemption, which draws us to the love of God the Father in the heavenly city.” Sr. Joan Fitzgerald, BVM, principal of the school, said her students have already responded positively to the new mural.

“I think it really has turned the gym [where Xavier celebrates its Masses] into a very reverent and more solemn place,” Sr. Joan said. “I think the students reacted that way when they walked in. It took their breath away.”