Archbishop of Canterbury Is No James T. Kirk 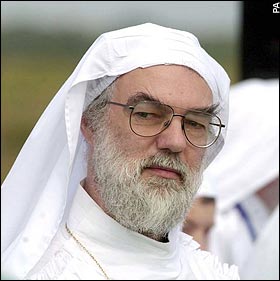 Just in the nick of time we see some real leadership from the Archbishop of Canterbury. No no, he isn’t doing anything crazy to save the Anglican communion like embracing orthodoxy or anything. Canterbury leads us in a different direction, off a cliff.

Rowan Williams has come out strongly in favor of the doctrine of higher taxes. Further, he gives us the source of this divinely inspired revelation, Big Brother 11.

[Telegraph]Dr Rowan Williams said that taxation should not be seen as a way of stifling business or redistributing wealth but helping to make the world a better place in which to live.

He called for new levies to be introduced on financial transactions and carbon emissions, and an end to the idea that unlimited economic growth is desirable.

The archbishop also claimed reality television gives us “alarming glimpses” of what the world would look like were everyone to be governed by self-interest.

The Archbishop of Canterbury, who looks remarkably like Sybok from the one of the worst movies of all time Star Trek V, has lost his marbles. As it happens, Sybok’s tale is instructive. Sybok, half brother of Spock, has rejected logic and embraced emotions as his guide. This allows him to be fooled by a false God that beckons him to a far-off Planet. Let’s call that planet, for the sake of argument, the Socialist Utopian planet.

Sybok cannot get to this utopian planet on his own so, knowing the rightness of his cause, he decides he can force others to do his bidding. In order to accomplish this, he fools people into going along and believing lies by appealing to their emotions. “Come with me”, he says “I will take you to a better place where you will be happy and never get sick.” It’s not true of course, but it convinces enough people who want it to be true to go along for the ride. Let’s call this, for lack of a better word, liberalism.

Of course, this is not enough. In order to get to this supposed utopia, he needs to take a few things from those who aren’t completely on board with the program. He needs the Enterprise. So Sybok and his emotional friends steal it at the point of a gun. Let’s call this taxation.

So after they have fooled all the people that they could and forced the rest at gunpoint to go along with their foolish plans, they finally arrive at this supposed utopia. Alas they discover that all that was promised them doesn’t materialize. Instead, they are greeted by their false god who, surprise, just wants more. It turns out that the false god wanted the starship (acquired through taxation) for his own nefarious purposes and was never really interested in helping the people in the first place. How disappointing.

Now that I think about, Star Trek V might one of the best political allegories since Animal Farm.

One of the more memorable quotes from this otherwise forgettable movie comes from our hero, James T. Kirk, a rugged individualist if there ever was one. Never fooled by the appeal to his emotions, he questions this false God and asks, “What does God need with a starship?” Ignored, he asks again. Let’s call this a town-hall meeting.

I would ask Rowan Williams a similar question. “What does God need with our tax dollars?” Either wake up from your socialist delusion or go back to watching Big Brother. Either way, leave our starship alone.

Phasers are not on stun.