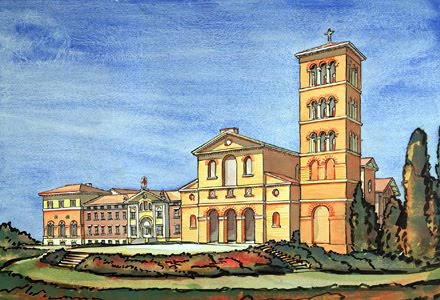 I had the good fortune to visit the new chapel at the Seminary of Our Lady of Guadalupe in Denton, Nebraska last week. Its architect, Thomas Gordon Smith, has been a leader in the use of New Classicism for Catholic churches for some time, and though this project has moved slowly as funds have some in, it is nearing completion.
A few notable points. First, this building has been ratcheted down in the budget without losing a convincing traditional design: the shiny copper used for the cornice on the exterior replaces stone, interior columns are made of cast stone (high quality “concrete”) which nonetheless look beautiful and have a high level of detail, and stenciling on the ceiling was done by the students of the seminary themselves.
A few other points of design sophistication: the exterior porch shows a great sense of the thickness of the wall (about 5 bricks thick) which saves the building from looking like a strip mall of pseudo-classical veneer and instead makes it appear deep and authentic. The porch also has round openings which not only reinforce the sense of the thickness of the wall, but show that the porch is tall inside and therefore a grand space. A very clever touch is seen in the front exterior entablature above the inscription: the center part is enriched with dentils and a more elaborate architrave (sorry for the architecture-ese) and then it quiets down at the edges. Saves money and adds design sophistication.
The half round or “thermal” window on the side has an arch composed which is three brick thick instead of merely one, suggesting the strength of the arch. The interior has a truly noble simplicity as well as beauty. The high altar under construction was taken from a closed church. More great work from a very talented architect. Enjoy!