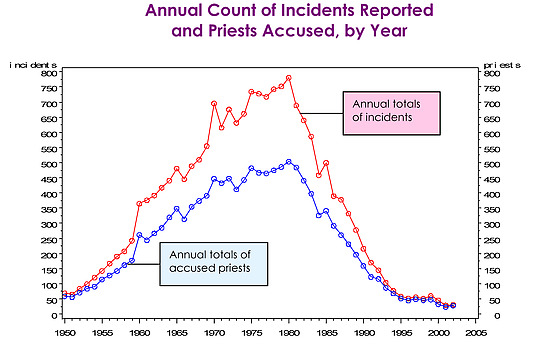 Vatican’s Secretary of State Cardinal Tarcisio Bertone said that priestly celibacy has nothing to do with it. Gay priests are doing the abusing.

On a visit to Chile, Bertone, dubbed the Deputy Pope, also said Pope Benedict would soon take more surprising initiatives regarding the sex abuse scandal but did not elaborate.

“This pathology is one that touches all categories of people, and priests to a lesser degree in percentage terms,” he said. “The behavior of the priests in this case, the negative behavior, is very serious, is scandalous.”

Of course pedophilia is the wrong term because most of the cases are post-pubescent boys, but aside from that the Cardinal is entirely correct. My question is then, so what? This debate is not over what the Church is doing to prevent such a abuse from ever occurring again, the media couldn’t care less at this point. The point of this barrage is to somehow discredit the Pope, and by extension the Church, by linking him with old cases.

Don’t get me wrong, I think that in order to truly address the root of the issue the Church has to take seriously the homosexual nature of the problem. But the truth has nothing to do with it at this point. This is a PR battle orchestrated by the enemies of the Church and the Church is losing. True or not, I don’t think the Cardinal’s remarks are particularly helpful in the matter of the day.

The Church has made tremendous strides in reducing the number of abuse cases in the last few years, but the media does not care.

Old cases are where it is at.

If you want to truly fix the problem, listen to Cardinal Bertone. For the rest, the New York Times.