Who Said This And Why? 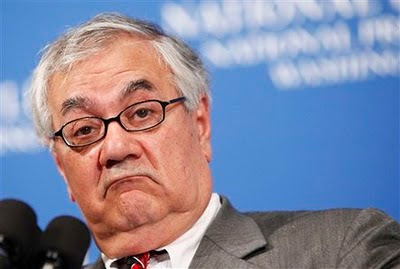 Ok. Who said this and why?

“Some adults will spend their money foolishly, but it is not the purpose of the federal government to prevent them legally from doing it.”

What politician in Washington believes that there are limits to the role of the federal gummint? Michelle Bachman? Ron Paul? Nope.

You ready for this? Barney Frank.

Yes you read that right. Now would be the time to make a quip about ‘strange bedfellows’ but I am above such things.

So why is Bawney suddenly for limiting the Feds intrusion into the lives of citizens and the expansion of the nanny state?

The restriction the Feds want to remove is the ban on online gambling. When the Congress banned online gambling in 2006, gamblers simply went elsewhere and took their potential tax dollars with them. Those tax dollars, ironically, have the Dems willing to send the nanny state home early.

To this end the financial services committee in the House voted 41-22 to lift the ban and send the bill to the full House for a vote.

If only the Dems would really learn the lesson here there might be hope. The greatest tax revenue generator ever known is freedom.