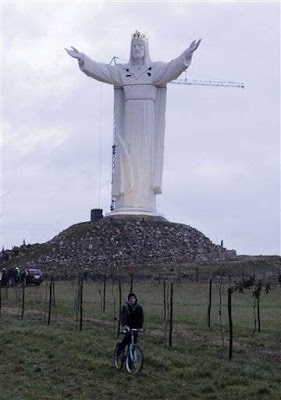 A gigantic status of Jesus, perhaps the biggest in the world, has risen above a small town in Poland.

The mayor of the western Polish town, Dariusz Bekisz, claims it is now the world’s tallest.

Rev. Sylwester Zawadzki, the 78-year-old priest who created the statue said it rises 108 feet, or 33 meters — one meter for every year that Jesus lived. Other members of the construction team, however, gave differing figures. One said it rises 167 feet if you include a mound it sits on and the crown on the head.

By comparison, the statue in Brazil’s Rio is 125 feet tall.

Fr. Zawadzki says that the statue is the culmination of his life’s work.

“I have never been as happy as I am today,” he said, beaming but clearly exhausted after seeing through the project that experienced setbacks and delays.

Zawadzki, known in town as “the builder priest” after also erecting two churches and other buildings, said he felt that he was called by Jesus to build the statue.

“This is the culmination of my life’s work as a priest,” he told onlookers and reporters who pressed around him.

“I felt inspired to fulfill Jesus’ will, and today I give thanks to him for allowing me to fulfill his will.”

Apropos of Nothing: Is it me, or do you kind of expect some hobbits to pass by on their way to Mount Doom?