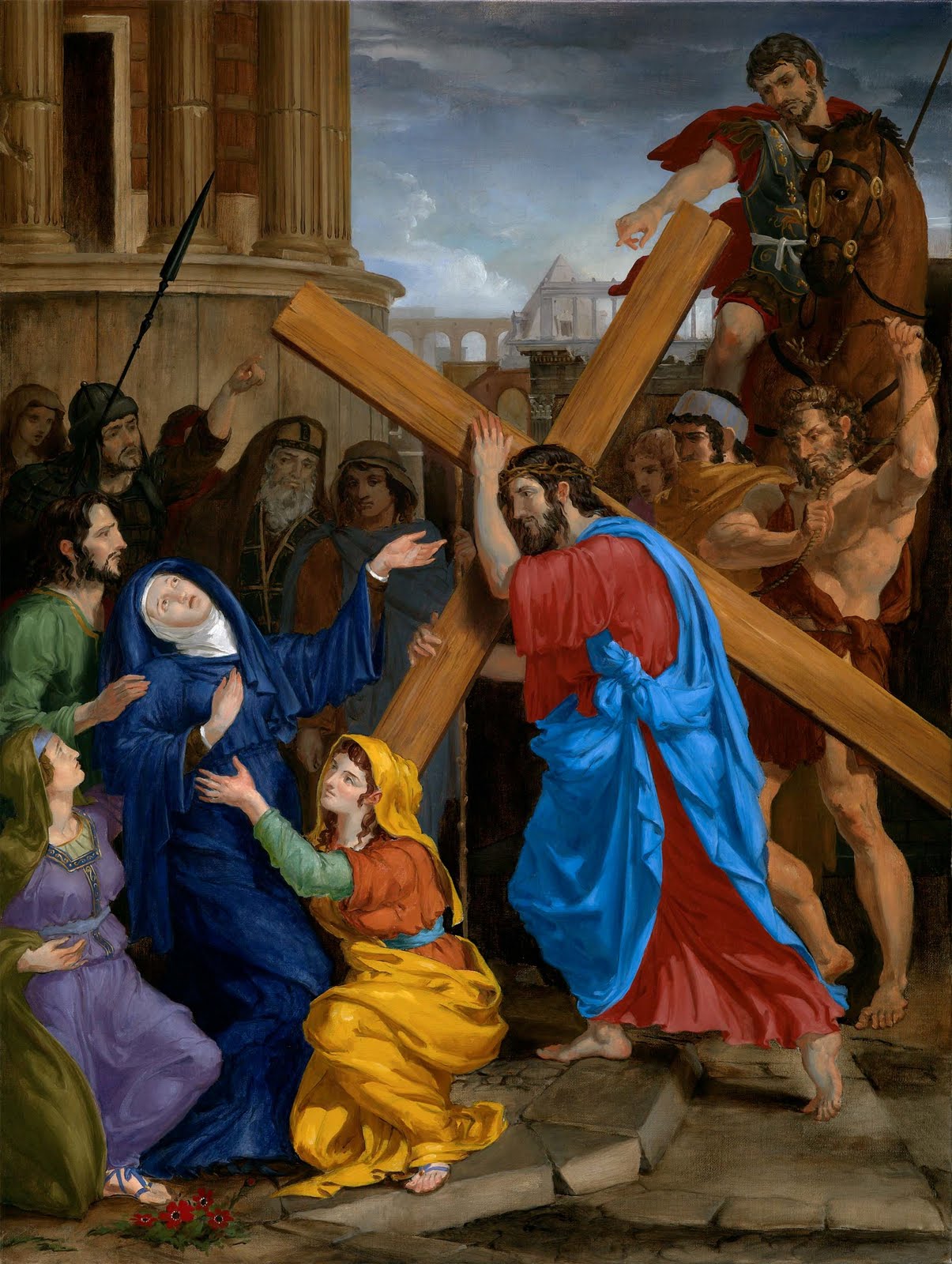 Now that we have entered Holy Week, CMR offers new meditations based on the set of the Stations of the Cross recently completed by New York painter Leonard Porter. (Mr. Porter recently sent me some updated photos that show the colors much more clearly.)

In Station Four, Christ meets his blessed mother together with Mary Magdalene and other women of Jerusalem. St. John is shown with them as well, wearing green and supporting the Virgin. Though the Virgin Mary swoons and Christ looks at her with compassion, his face remains focused on his task, as even compassion for his mother cannot keep him from his mission of salvation.

Here the chaos begins to grow. Earlier stations had certain calm, but now a man on the left holds a spear , prefiguring the piercing of Christ’s heart, pointing upward to the hill of Calvary as if yelling “get him out of here.” The Roman guard on the horse points to the Virgin, without compassion yelling for her to be removed from Christ’s path. In this way she shares some of the wrath of the mob, both Christ and his mother being pushed aside and both given little compassion. The gesture of the solider points not only to Mary, however, but also to the pyramidal tomb in the background. This tomb evokes the famous Tomb of Cestius in Rome, and its location behind many layers of buildings indicates how the landscape in this image indicates Christ’s path in the via dolorosa: he will pass many buildings, but at last will be placed in the tomb.

Behind the Virgin’s outstretched hand we see a small tableau of an old man and youth. Just as Christ’s salvific action bridges the time between the old law and the new era of grace after the Resurrection, so this tableau indicates that Christ’ Passion comes at an “in-between time” after the Age of Shadow and before the Age of Reality at the end of time. The youth carries a shepherd’s staff, indicating his symbolic representation of Christ the Good Shepherd in the new age of grace.

Christ’s pose is calm, his expression determined, his clothing gem-like and radiant, prefiguring heavenly glory. Moreover, he climbs up a single step indicating his progress up to the hill of the crucifixion.

Marian images appear as well. A small red anemone appears in the left foreground, a flower traditionally associated with the Virgin. Less obvious, though, is the round temple in the background, which alludes to the Temple of Sybil in Tivoli, once known as the Temple of Vesta. (A similar example exists in ruin in the Roman Forum to this day.). In these small round temples were located the sacred fire of Rome, tended by the famous vestal virgins who took a vow of chastity. More than a simple old-looking background building, this temple speaks of the virginal nature of the Mother of God.