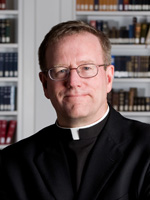 The new evangelization comes to Chicago!

Cardinal Francis George, Archbishop of Chicago, announced today that Fr. Robert Barron, widely known as founder of Word on Fire Catholic Ministries, will become the Rector/President of Mundelein Seminary and it’s mother institution, the University of St. Mary of the Lake.
Fr. Barron has become a household name not only to CMR readers, but around the world with his ten-part series, Catholicism, as well as his YouTube videos, articles and books. A scholar, preacher, teacher and unapologetic advocate of the New Evangelization, Fr. Barron speaks often that Catholics should be “happy warriors” for the Faith.
According to a statement released on the Word on Fire web page, his appointment will take effect on July 1, 2012, succeeding Msgr. Dennis Lyle, who has served as Rector/President for the last six years.