How About A Catholic Woman For Veep? 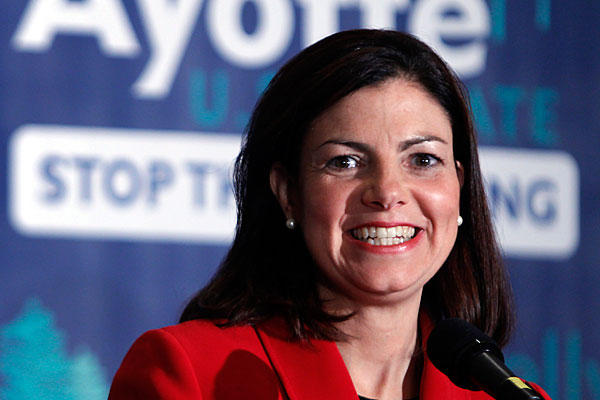 There are some rumors that New Hampshire Senator Kelly Ayotte has a real shot at the Veep pick. Nobody knows for sure and we will likely find out soon enough, but Senator Ayotte sure would be an interesting pick. She is a 44 year old Catholic mother of 2 and U.S Senator from New Hampshire.

Another relatively unknown woman from up north you harumph? The New Republic says that might work in her favor.

Imagine: Romney picks Ayotte. The initial pundit reaction is, OMG, another little-known attractive brunette with young children from up north! What can he possibly be thinking? But within hours, I predict, this would give way to a second, more lasting wave of spin: Hey, what do you know? Kelly Ayotte is not Sarah Palin! Because she most certainly is not. Palin had only a few years earlier been the mayor of a 5,000 person town with decidedly minimal responsibilities. She had all sorts of baggage, including her questionable firing of a public safety commissioner who had resisted her demands to crack down on her ex-brother-in-law. She had an, er, tenuous grasp of world affairs beyond the Alaskan airspace through which Vladimir Putin reared his head.

Ayotte, on the other hand, diligently worked her way up through the ranks as a prosecutor to become the state attorney general. (It so happens that I covered her first major homicide trial in Concord in 1999, a gruesome, high-profile rape and murder of a 6-year-old girl. I remember Ayotte as capable but slightly nervous in her big debut, using her girl-next-door charm—she was only 31 at the time and looked even younger—to build credibility with the jury; her father came to watch her closing statement.) Unlike Palin, she has no stable of hometown enemies and no known baggage, other than her failure to stop a huge Ponzi scheme based in the state during her tenure as attorney general. She is even-keeled where Palin is volatile. And in her first year and a half in the Senate, she has deliberately plunged into foreign affairs, enlisting as an eager member of the McCain-Graham-Lieberman caucus to cast Barack Obama as feckless abroad.

Would Romney truly consider such a thing? Who knows, but there is this piece of non-informing information.

In the days leading up to public announcements, vice presidential candidate’s Wikipedia pages are frequently updated by campaign staffers.

New Hampshire Senator Kelly Ayotte has the highest number (153) of edits out of all of Romney’s possibilities; coincides with joint appearance today
Marco Rubio had 100 edits, Rob Portman had 81 and Paul Ryan had 57

Make of it what you will. If it is Ayotte, boy I hope she has a thick skin.