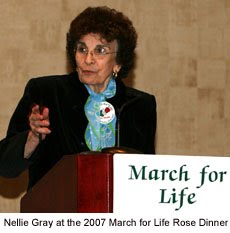 August 13, 2012 (LifeSiteNews.com) – One of the leading lights of the pro-life movement in the United States has gone out. Nellie Gray, the charismatic founder of the annual March for Life in Washington, D.C., the largest annual pro-life event in the country, passed away over the weekend, and was discovered in her apartment earlier today.

Gray was an ubiquitous figure at the pro-life march, her slight frame standing at the podium at stage centre, introducing the many luminaries who addressed the crowd of several hundred thousand during the rally before the march.

“Nellie Gray and the March for Life had a most profound effect on my life,” said Father Frank Pavone, National Director of Priests for Life. In 1976, when he was a senior in high school, Father Pavone went to the March for Life with his mother and grandmother. Although he had been quietly considering the priesthood before that, the March cemented both his vocation and his passion for pro-life issues.

“Every year since 1974, Nellie Gray has mobilized a diverse and energetic army for life,” said Father Pavone, who has attended every march since his first one. “Her own commitment to the cause never wavered. She was a tireless warrior for the unborn and her motto was ‘no exceptions.’ “

Rest in peace.
SHe fought harder and longer than anyone for the unborn and I know that God was watching.