Why I Think The Race Is Tied 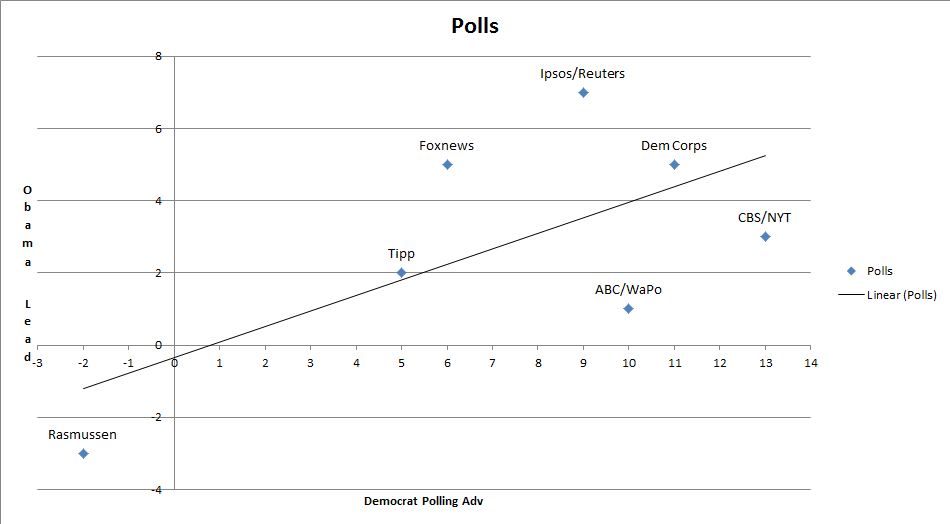 Poll after poll shows Obama leading Romney from anywhere from 3 to 6 points.

This is why I think that the race is actually a dead heat.

Let’s look at some recent elections to get a feel for what we can expect. In 2004, the voting public among voters registered with a party was dead even at 37 for Republicans in Democrats. As we know, 2006 turned worse for Republicans and they experienced serious setbacks in the house and this was a bellwether for 2008 when Democrats saw a 7 point advantage at the polls, their highest ever.

Clearly, Democrat enthusiasm is down since 2008 and in 2010 we saw huge turnout for Republicans handing the Democrats an historic defeat in Congress.

So now when pollsters estimate the turnout model for 2012, you would expect them to choose a number reflective of 2010 and closer to 2004. I think that anything between dead even and D+3 could be defended.

So is that what pollsters are doing? Not even close. Many pollsters, in an effort to dishearten Republicans, are skewing their samples sizes ridiculously toward Democrats. Some just pretend that 2010 never happened and use the D+7 from 2008 as a sample. As ludicrous as that may seem, others however not only assume that but add another D+6 on top of that!!

Take for instance this new CBS/NYT poll. The poll has Obama up 3 points but the sampling has D+13. 13 points!!! That is ludicrous beyond belief and an embarrassment to anyone associated with it.

So what I have done is take a sampling of several polls and plotted the Obama advantage against the Dem sampling advantage using slightly updated information obtained here.

What you can see is that looking at the trend line using a Democrat sampling advantage of anywhere from D+0 to D+3, which I think is much more in line with reality, the race is a statistical dead heat right now. Actually, I think anything south of D+3 spells real trouble for the Democrats.

So do not despair, the race is tied right now and Romney has an advantage among independents in almost every poll. If I read this right, I think that against an incumbent, the challenger Romney is in a pretty good spot right now. If he holds his own in the debates, I actually still think the advantage goes to Romney. Time will tell, but I think the race stands dead even right now. What do you think?