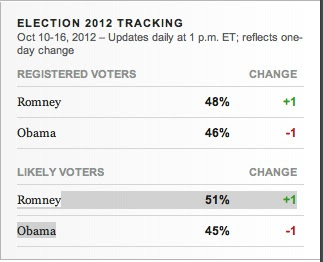 In two days of polling, Mitt Romney is up at 50% or over. In politics, that’s the magic number. That means your opponent can’t beat you with positive ads. That means your opponent has to take out the knives against you. And I think that’s what we saw last night. Every answer Obama gave, he first gave his canned response and then went after Romney. And let’s face it, he went after him hard. I’m not sure it was effective. But he did go after him.

And you have to love that he went after the 47% comment right at the end when he knew Romney couldn’t respond. Expect the October nastiness to get even nastier. This is about to get very ugly.