The Number You Want To Look At 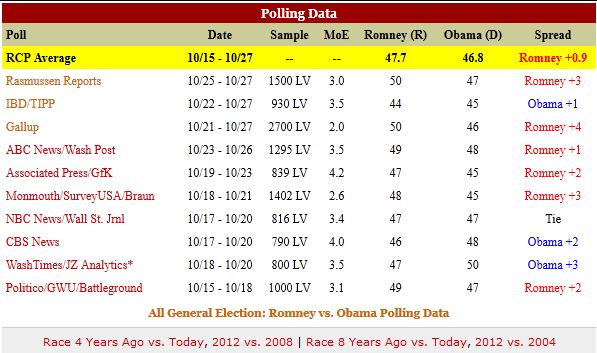 Polls, polls, and more polls. What to make of it all.

I wish to make a quick point about polls. Nationally the RCP average of polls has Romney up by 0.9. That may not seem like much but…

The key take away from the above, even including some polls with very questionable Democrat turnout assumptions, Romney is still winning, but not by much.

But, even with those skewed polls included, the Obama averages only 46.8%.  That is not a good place to be for an incumbent.  It is an even worse place to be as an incumbent when every single poll shows independents going to Romney with big numbers, double digits in many.

I am not saying this is in the bag for Romney, I am saying that Obama really wishes he was in Romney’s bag.