Media Lies And Your Guns 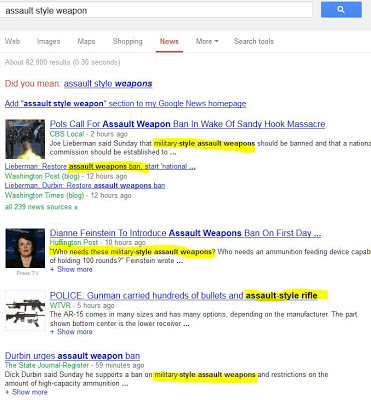 It is sad that the nation cannot be granted even the smallest window to grieve without politics coming to the fore. I wish I could just ignore it all, but I can’t because liberty is at stake.

What progressives and their cohorts in the media always do is try to use language to frame a given debate in their favor. They have wanted your guns for a long time and they think they can use dead children to get it.

All weekend long, the media reported on the massacre and politicians screamed about the need for gun control. As most people would love to do something to prevent something like this from ever happening again, they are receptive to such messages.

All weekend long the media has reported that Adam Lanza used a “high powered rifle” and “assault style weapon” to kill. See Below

For heaven’s sake, why would anyone need a “high powered rifle” or “assault style weapon?”

But these terms are loaded lies of unspecified definition pre-determined to sway people.

Ask them what an assault style weapon is?  A semi-automatic?  Most rifles sold in this country are semi-automatic, meaning one bullet per trigger pull. These are not Al Capone Tommy guns.  These are the same ordinary guns that many people own responsibly.

What is “assault style?  Truth is, there is no definition?

What is a high-powered rifle by the media definition?

Let’s look at some facts.

Of course, at close range this weapon can kill effectively as almost every other type of gun can and tragically has.

These people want to ban almost all guns and they will use dead children and lies to advance their cause.  Don’t be fooled.