Priest Calls for Next Pope to be Gay 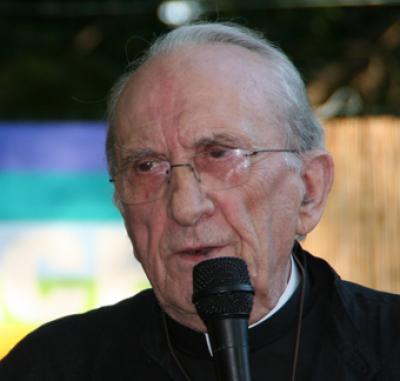 An Italian priest has said he thinks the next Pope being gay would be “wonderful.” I think he meant to say “faaaabulous” but maybe he’s not hep to the lingo and all.

The priest, Don Andrea Gallo, looks older than Stonehenge and less healthy than Abe Vigoda so I’m pretty sure we won’t be hearing from him too much longer. But here’s what he said and please take note of the link the priest makes between homosexuality and pedophilia:

Don Andrea Gallo, a religious LGBT advocate in Italy, has said a homosexual pope would be ‘wonderful’.

‘A homosexual pope would be a wonderful thing,’ he told Italy’s Radio 24. ‘There is equality of the children of God. It is the essence of the Gospel, we are all sons and daughters of God.’

Gallo added: ‘A homosexual priest should be free to express his or her identity and her sexuality, otherwise it represses and becomes pedophilia.’

Uhm. I thought there was no linkage between homosexuality and pedophilia. He seems to think so. And the Gay Star News reported it without throwing a flag on the play.

And also, please take notice he referred to priests as him or her. Kinda’ telling, huh?

Well, if you were interested in investigating those rumors about a gay cabal secretly running the Church, Fr. Gallo would seem like a good place to start for info. I guess someone forgot to tell Fr. Gallo the first rule of gay cabal is that what happens at gay cabal stays at gay cabal. So it’s kinda’ like Vegas but with more glitter. And the showgirls are a little hairier.

Hey, CMR is all for actively gay priests to be loud and proud and not repressed about it. That’ll save us all from having to read the Vatileaks report.