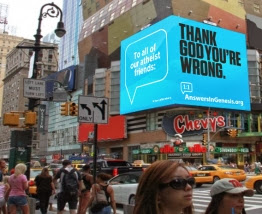 This is actually pretty clever. As you know, we’ve been inundated with atheist billboards. Well, the group Answers in Genesis has this billboard up in Times Square and somewhere in San Francisco as well.

Some dope at HuffPo absolutely exploded about the billboard and said it made her ashamed of being a Christian. What?

She said, “The first reason I don’t think Christians should support this photo should be obvious. To say ‘you’re wrong’ is unconvincing. It’s also unloving.”

You’ve got to love that. Telling people that God exists is unloving and wrong now.

God is the new secondhand smoke. You’re allowed to enjoy God in certain select areas but don’t you bringing that oogedy-boogedy stuff around other people, freak. Jesus is harmful to others, don’t you know. And mentioning Him to those who don’t believe in Him is just hateful and possibly even damaging to their psyche. Or something.