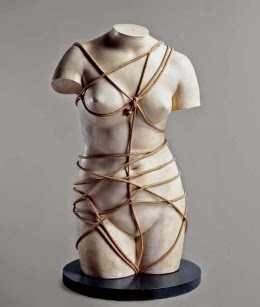 From the same dopey people in the Vatican who brought that painful #LifeOfWomen Video, the English language version of which was eventually pulled because it was so roundly mocked, we now have this stupidity posted on the Vatican website.

This is meant to symbolize women in bondage.  Cuz there was no other way to do that.

Even after complaints, they are digging in to defend this stupidity.

Some complaints have reached the Dicastery concerning the image above. While acknowledging the anger, Cardinal Ravasi has chosen not to remove the image as it speaks clearly for one of the central points of the document: many women, alas, are still struggling for freedom (bound with rope), their voices and intellect often unheard (headless), their actions unappreciated (limbless).

Genuine oppression of women is a real problem that is not served by this kind of stupidity.