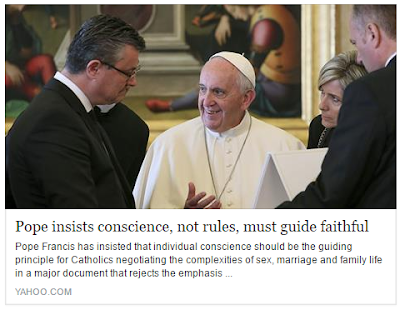 Well, it is here. The post-synodal Apostolic Exhortation is here.

I spent hours going through it, but even that was not enough to read the entire thing as it comes in at almost 60,000 words including references and footnotes.

Over the next days, I am quite certain that you will see analyses that try to pin down exactly what the Pope is saying. But what is clear from the document is the Pope does not wish to be pinned down in such a way. It is without a doubt that I can say that ambiguity is the Pope’s aim, and in that, this document is a shameful act on the part of the Pope.

In key passages on the hot topic, the Pope goes on and on in such a way that makes clear that he advocates for an internal forum solution, a case by case discernment of circumstances between the pastor and the adulterer. And no, the Pope doesn’t come right and say it because that is what he studiously avoids. But the intent is clear. Don’t listen to anyone that says otherwise. Those looking for such a solution will find all the justification they need in those paragraphs. Those that follow the barely disguised suggestions of the Pope will be lead into sacrilege. That a Pope would behave this way should give us all pause.

In those key paragraphs (298-302) he posits that it is impossible to know anyone’s culpability for the obvious sin in which they participate, so any kind of rule is casuistry. His calls for pastoral discernment are a clear call for the internal forum solution, even though he never quite comes out and says it.  But people are already getting the message. (see image)

In another shameful section, the Pope attempts to side-step the clear teaching that by an unworthy reception of the eucharist, one eats and drinks judgment upon one’s self.

186. The Eucharist demands that we be members
of the one body of the Church. Those who
approach the Body and Blood of Christ may not
wound that same Body by creating scandalous
distinctions and divisions among its members.
This is what it means to “discern” the body of
142
the Lord, to acknowledge it with faith and charity
both in the sacramental signs and in the community;
those who fail to do so eat and drink judgement
against themselves (cf. v. 29). The celebration
of the Eucharist thus becomes a constant
summons for everyone “to examine himself or
herself ” (v. 28), to open the doors of the family
to greater fellowship with the underprivileged,
and in this way to receive the sacrament of that
eucharistic love which makes us one body. We
must not forget that “the ‘mysticism’ of the sacrament
has a social character”.207 When those
who receive it turn a blind eye to the poor and
suffering, or consent to various forms of division,
contempt and inequality, the Eucharist is
received unworthily. On the other hand, families
who are properly disposed and receive the
Eucharist regularly, reinforce their desire for fraternity,
their social consciousness and their commitment
to those in need.

This redefinition of “discernment of the body” is a scandalous inversion of the true meaning of the admonition. No, the Pope does come right out and deny Church teaching in this area, he skirts it and tries to distort it. It is shameful.

In my view as a whole, this document will make nobody’s life any better. It will lead nobody out of sin. At its worst and in its particulars, it will serve only to confirm people in their sin and lead priests, prelates, and others into sacrilege. Nobody will be saved by this Jesuitical word-puke, unworthy of a successor of Peter, the Vicar of Christ, and many souls may be lost because of it. This document is a shameful act and a grave evil.

A pastor leads his flock out of danger, this leads them to the wolves den. If you love as Jesus commanded us, you will hate this document.

It gives me no pleasure to know that I was right, that what I warned about, happened. Those looking for a green-light for sacrilege will find it in this document. What comes next will not be pretty. Those who stick with the CHurch’s perennial teaching on these matters will, over time, become ostracised or worse for the crime of unpastoralness. God help us all. Pray, pray, pray.