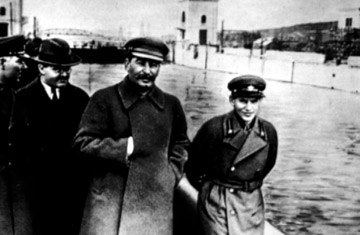 In the Soviet Union, leaders, like Stalin, would often not just erase people. They would attempt to erase them from history by literally removing them from pictures.

Nikolai Yezhov, chief of the Soviet secret police, was “disappeared” by Stalin, similarly to Leon Trotsky.

Well, now ESPN, is going full Stalin. You might recall from last week that Curt Schilling was fired from ESPN for having the gall to say that men should use men’s bathrooms. I know, right? So ESPN fired him. And now, it seems they’re going one step further.

During Sunday’s airing of the “30 for 30” documentary “Four Days in October,” which details the Boston Red Sox’s epic four-game comeback against the New York Yankees in the 2004 ALCS, the network cut out a pretty crucial part of the story. Curt Schilling’s Game 6 start, also known as “the bloody sock game,” was edited out

Now, to be clear, the “bloody sock game” is the stuff of legend. It is one of the biggest games in recent baseball history, and the centerpiece to that year’s historic run by the Red Sox.

ESPN is saying “Oh no no no. This is all just one big misunderstanding.” They said that a softball game ran long so they just edited it down a little bit for time constraints.” It just so happens that they cut out Schilling and one of the most memorable games in baseball history.