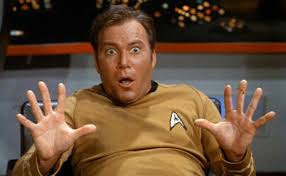 There’s lots of commentary about the Sulu character being a homosexual in the latest Star Trek movie. Even George Takei thinks it’s a stupid idea.

Some conservatives are swearing off the series now. I’ll admit I’m a fan of the Wrath of Khan and I think Shatner’s over-acting can be fun.

But Trek creator Gene Rodenberry, a self described humanist who had very little good to say about organized religion, wrote a script in which the Captain of the Enterprise James T. Kirk fought Jesus.

Author Michael Jan Friedman of a just released book about Star Trek said that when Rodenberry first wrote a script for the first movie, he wrote a scene in which Kirk fights Jesus. Well, not actually Jesus but some being acting as God.

“Gene was — and still is — one of my heroes, for God’s sake, no pun intended. As he had already left the land of the living, this was a unique opportunity to collaborate with him. But when I read the material, I was dismayed. I hadn’t seen other samples of Gene’s unvarnished writing, but what I saw this time could not possibly have been his best work. It was disjointed — scenes didn’t work together, didn’t build toward anything meaningful. Kirk, Spock and McCoy didn’t seem anything like themselves. There was some mildly erotic, midlife-crisis stuff in there that didn’t serve any real purpose. In the climactic scene, Kirk had a fistfight with an alien who had assumed the image of Jesus Christ. So Kirk was slugging it out on the bridge. With Jesus.”

Oh my. (Yes, you have to read that line like George Takei.)

Mercifully, everyone thought the script was just waaaaay too awful so it never saw the light of day. Hey, maybe it would’ve ended with Kirk finding God.

But probably not. Rodenberry himself never had many good things to say about religion. It could’ve been because he spent much of his adult life in an alcohol and drug filled haze.

Roddenberry reportedly said of Christianity, “How can I take seriously a god-image that requires that I prostrate myself every seven days and praise it? That sounds to me like a very insecure personality.”

This from Wiki:
According to Ronald D. Moore, Roddenberry “felt very strongly that contemporary Earth religions would be gone by the 23rd century”. Brannon Braga said that Roddenberry made it known to the writers of Star Trek and Star Trek: The Next Generation that religion, superstition, and mystical thinking were not to be included. Even a mention of marriage in a script for an early episode of The Next Generation resulted in Roddenberry’s chastising the writers. Nicholas Meyer subsequently said that Star Trek had evolved “into sort of a secular parallel to the Catholic Mass”. Roddenberry compared the franchise to his own philosophy by saying: “Understand that Star Trek is more than just my political philosophy, my racial philosophy, my overview on life and the human condition.”

Now, that’s not to say there haven’t been some moments where Star Trek didn’t treat Christianity well. There have been. But let’s face it, overall, it’s been quite the humanist adventure. And I don’t think I’ll ever get the image of Kirk fighting Jesus out of my mind.