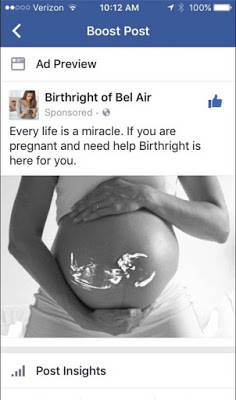 A crisis pregnancy center in Maryland wanted to place an ad on Facebook. This one:

But they were a bit shocked when Facebook rejected their ad. Fortunately, they didn’t take this lying down.

Atha, the organization’s outreach coordinator, didn’t understand why Facebook wouldn’t allow the center to pay to have the advertisement reach a wider online audience.

“Within five minutes it was rejected,” said Atha. “I didn’t think that was appropriate. It was really rather odd since everything in the ad seemed very positive and encouraging.”

After Atha appealed Facebook’s decision, she found out it was the phrase ‘If you are pregnant’ that caused the social media giant to reject the message.

“They paralleled it to ‘if you are fat’ or ‘if you are overweight’,” said Atha, who was told by a company representative that Facebook doesn’t allow ads that call out to specific user attributes, such as race, religion or age, since it could be offensive.
Atha re-worded the advertisement which now says “Every life is precious. Pregnant women and their families can find hope and unconditional support at Birthright.”

It was approved, said Atha, but after twelve hours instead of minutes like her previous blurbs.

“It makes no sense,” said Atha. “It definitely makes me wonder what’s going on behind the scenes of Facebook a little bit.”

Don’t wonder. They turned you down and hoped you might just go away. But CPC’s around the country know that they have to fight against the culture every step of the way. Good for them.