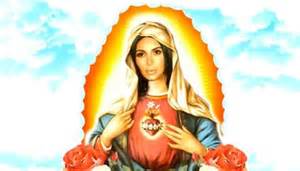 Before we get excited about this, let’s just remember. This is what she wants. The reality tv star is selling a candle with a picture of her dressed as the Virgin Mary. Yeah, ridiculous, disgusting even. When social media blew up, she then donned a skintight dress with a pic of the Virgin Mary right on her chest. I know, right?

These are the actions of a carnival barker desperate for attention. But she’s not just selling a candle. She’s selling herself. And if it’s herself in the middle of a controversy it doesn’t matter. She only has one product and that’s the media talking about her. And let’s face it, in this case, she picked an opposition that the media loves to poke so it’s a match made in…hell, I guess.

I’ll spare you the pic of her in the dress because…Catholic blog and all.

I see your point that here I am telling you not to get worked up over this and here I am posting about it but…Catholic blog and all.