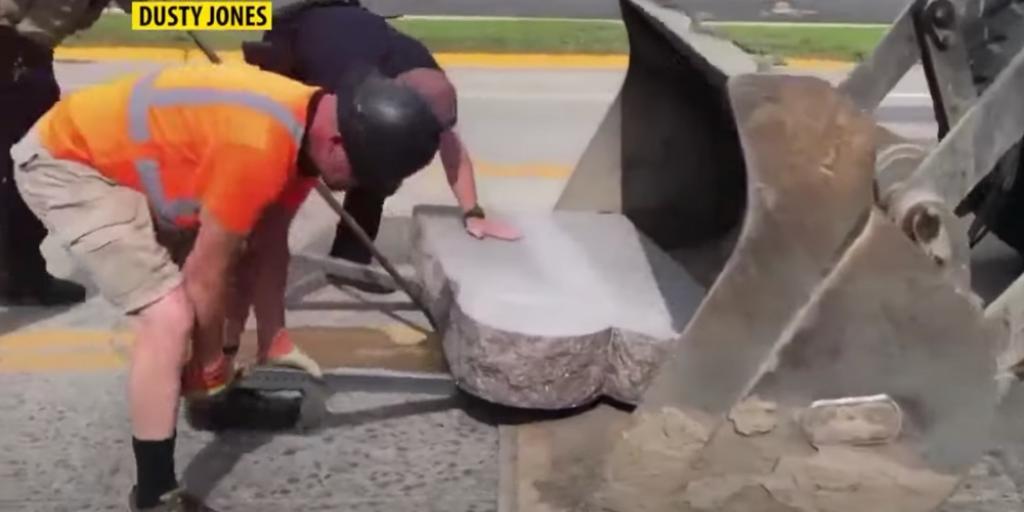 Me: I’m guessing he was specifically protesting “thou shall not steal.”

A man has been arrested for allegedly tearing down a Ten Commandments monument on the grounds of a county courthouse in northwest Montana.

The man, a 30-year-old Columbia Falls resident, allegedly wrapped a chain around the monument at the Flathead County courthouse grounds in Kalispell on June 27. He attached the chain to his truck, then pulled the monument into the street. He removed then chain, got into his truck, and left the area.

The accused man, Anthony Weimer, faces a felony charge of criminal mischief. Police said they did not know any motive for the action.

Kalispell Police Chief Doug Overman told MTN News he has no affiliation with any protest or demonstration groups in Flathead County.

Local media did not know whether the monument could be restored or if it had to be replaced.

The Ten Commandments monuments, often spread in collaboration with the movie of the same name, have been a tool for building Catholic, Protestant and Jewish unity in America. They have sometimes drawn objections, protests, and legal cases due to perceived violations of constitutional provisions regarding separation of church and state and non-establishment of a religion.

Many public monuments have been the focus of vandalism or have been thrown down in recent weeks.

Largely peaceful protests against police brutality swept the United States after the spread of video showing the death of Minnesotan George Floyd, a black man, during his detention by police.

However, civil unrest, looting, and vandalism have sometimes accompanied or followed these protests. Long-controversial statues of Confederate leaders were toppled in some localities, as were statues of George Washington, Christopher Columbus, and Ulysses S. Grant.

At least two statues of St. Junipero Serra were knocked down by rioters in California.

I’m betting dollars to donuts (and you know how much I love donuts) that the guy couldn’t even name all the Ten Commandments. I’d also bet 90 percent of the people vandalizing St. Junipero Serra couldn’t pronounce his name correctly, never mind what his crimes are supposed to be. I’d bet most couldn’t pinpoint what century he lived in. Even ball parking it.

What we are witnessing it hate. This is like shotgun hate with a wide spray. No aim necessary. They know they hate Christianity and that’s all. The thing is, the left hates Christianity because they instinctively know it is the basis of our civilization. I wish Christians understood it well enough to defend it.

Look, defending Christianity in the public sphere is hard but if you don’t, it’s going to be a lot harder to be a Christian in public.