Vatican Warns Bishops Against Taking a Stand for Life 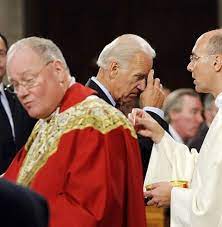 This couldn’t have been more expected yet still disappointing. Actually, the only shocking thing here is that the Vatican actually believed that the US bishops were going to bravely and faithfully take a stand for life in the first place. The sad part is the Vatican was so afraid of this that they felt the need to step in.

Look at this lead from the AP:

The head of the Vatican’s doctrine office is warning U.S. bishops to deliberate carefully and minimize divisions before proceeding with a possible plan to rebuke Roman Catholic politicians such as President Joe Biden for receiving Communion even though they support abortion rights.

Please feel free to compare that sentiment with Luke 12:49-53 where Jesus said to his disciples: “I have come to set the earth on fire, and how I wish it were already blazing! There is a baptism with which I must be baptized, and how great is my anguish until it is accomplished! Do you think that I have come to establish peace on the earth? No, I tell you, but rather division. From now on a household of five will be divided, three against two and two against three; a father will be divided against his son and a son against his father, a mother against her daughter and a daughter against her mother, a mother-in-law against her daughter-in-law and a daughter-in-law against her mother-in-law.”

Cardinal Luis Ladaria, prefect of the Vatican’s Congregation for the Doctrine of the Faith, addressed a letter to Archbishop José Gomez of Los Angeles, president of the U.S. Conference of Catholic Bishops saying that any new policy “requires that dialogue occurs in two stages: first among the bishops themselves, and then between bishops and Catholic pro-choice politicians within their jurisdictions.”

So once again. The term “dialogue” seems to mean “shutup!!!”

Ladaria suggested that the bishops should seek unanimous support within their ranks for any national policy, lest it become “a source of discord rather than unity within the episcopate and the larger church in the United States.” Taking that piece of advice would only ensure that nothing positive could possibly come from their meeting on June 16th.

Ladaria made several other points that could complicate the plans of bishops pressing for tough action:

Ladaria also questioned the USCCB policy identifying abortion as “the preeminent” moral issue, saying it would be misleading if any new document “were to give the impression that abortion and euthanasia alone constitute the only grave matters of Catholic moral and social teaching that demand the fullest accountability on the part of Catholics.”

See how easily the terms get switched. He went from saying the bishops talking about abortion and euthanasia being the “preeminent” moral issue to saying it gives the impression that it’s the ONLY moral issue. Preeminent doesn’t mean singular. In fact, preeminent means that it it foremost among many. Nowhere does any bishop or any Catholic or even any person who exists outside of a coma unit think that there is only one moral issue.

Ladaria is merely attempting to thin the gruel to lukewarm tastelessness.

Ladaria also said that if the U.S. bishops pursue a new policy, they should confer with bishops’ conferences in other countries “both to learn from one another and to preserve unity in the universal church.”

This is so utterly disheartening to the millions of pro-life Catholics who are outside praying in front of clinics and the thousands who work for crisis pregnancy centers. This kind of thing does damage. I can’t help but think that’s what it was intended to do.