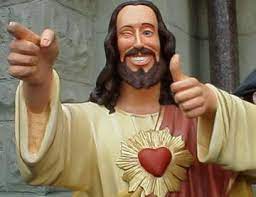 Not just regularly harmful. “Grossly harmful.” I’d be interested to understand where the line is between regular ol’ harmful and “grossly harmful” but something tells me we wouldn’t really get anywhere with that discussion.

But a church that stays silent on important issues is a Church reneging on its most important responsibility – which is saving souls.

You are not supposed to have a vaguely nice feeling about Christianity. If your faith isn’t challenging you to change, you don’t have a faith.

In short, what these people really mean is, “Shutup Catholics!”

More than 250 alumni of St. Paul Catholic High School in Bristol are asking school leaders to remove a gender identity policy added to the 2021-2022 student handbook, calling the language “transphobic” and “grossly harmful to past, present and future students.”

In an open letter, first reported by The Bristol Press, the alumni take issue with a handbook passage that states: “God made male and female in His image and likeness. He made every child exactly as He intended.”

“Accordingly, and consistent with Archdiocesan OEEC policy,” the section continues, “St. Paul Catholic High School shall accept and relate to students and all members of the school community, for the duration of their years in attendance at St. Paul, according to their God-given, biological sex as male or female consistent with the complementary nature of each, and maintain appropriate distinctions between males and females especially in issues of facilities use, athletic teams, uniforms and nomenclature.”

The handbook also says the school “shall not sponsor, facilitate, or host such organizations, events, or activities that would promote views contrary to Catholic doctrine regarding human sexuality and gender, either on or off campus, or thorough social media,” and a “pastoral approach consistent with Catholic Church teachings must be used in addressing matters of gender, including transgenderism, and gender dysphoria.”

Kindeya Chiaro, a 2013 graduate and member of the LGBTQ+ community who wrote the alumni letter in September, said those who signed it “of course understand St. Paul is a Catholic school and it needs to act in accordance with teachings of the Catholic Church.”

“But I think it is possible to be in alignment with Catholicism while still creating a safe and welcoming environment for all students,” she said. “What we’re hoping St. Paul … understand[s] is not everything has to be strictly black and white, and people often live at intersections: A student can be Catholic and nonbinary, a student can be Christian and trans.”

“Male and Female He created them.” That seems pretty black and white to me as well. A binary, if you will.

For too many people today, it seems the generational challenge they have taken is not to make themselves more like Christ, but to simply pretend that Christ was more like them.