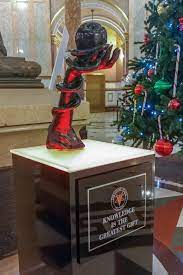 These people clearly don’t believe in God so I’d ask where does their right to free speech and expression derive from, if not God? It doesn’t. They depend on the rights that the Constitution says derive from our Creator in order to be allowed to deride the source of those rights. Seems untenable.

The State Journal Register: The state Capitol rotunda will have a satanic display alongside other religious art for a third year. The Satanic Temple is returning with an art installation to celebrate the “satanic holiday” of Sol Invictus.

The group conducts advocacy for reproductive rights and the separation of church and state as a tax-exempt religious organization.

This year’s display will feature the “satanic deity” Baphomet, depicted as a swaddling babe. It was designed by Albuquerque-based horror artist Chris P. Andres.

The exhibition will be installed at 1 p.m. Monday in the Capitol rotunda, overseen by The Satanic Temple’s Illinois congregation.

“This year’s tradition marks a greater urgency in the Baphomet’s message of harmony and reconciliation,” noted The Satanic Temple’s Director of Campaign Operations Erin Helian in a press release.

The group’s displays have courted controversy, particularly from the Diocese of Springfield in Illinois and its head, Bishop Thomas Paprocki. He recently oversaw the installation of a nativity scene in the Capitol rotunda. At the event, Paprocki said satanic displays “should have no place in this Capitol or any other place.”

“Mocking the millions of Christians in the state of Illinois and billions around the world by depicting the baby Jesus this Christmas with the ‘satanic deity’ Baphomet is the very definition of evil and causing division, but that is to be expected from an organization that is in existence to troll people of faith,” said Andrew Hansen, a spokesperson for the diocese.”

This is juvenile and sad.