Catholics in the Crosshairs – Update 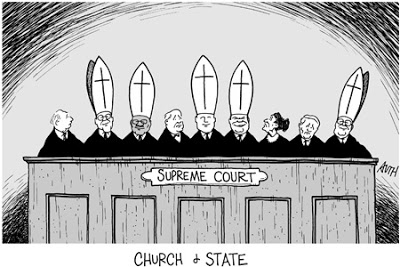 As a follow up to Matthew’s post from yesterday, it did not take very long to prove him right. Check out these anti-Catholic examples just from today.
First, a cartoon in the Philadelphia Inquirer:
It is stunning that a paper such as the Inquirer would run such a blatantly anti-catholic cartoon. Clearly they do not fear uprisings in the ‘Catholic Street’ the same way they do with the ‘Muslim Street’. And then we have Rosie O’Donnell, what to say about this particular diatribe?

O’DONNELL: You know what concerns me? How many Supreme Court judges are Catholic, Barbara?

O’DONNELL: Five. How about separation of church and state in America?

This blatant anti-Catholicism is unbelievable if unsurprising. Rosie is as vicious as she is uninformed. If your conscience is informed by your religious convictions, or if you just have a conscience, or if you disagree with Rosie then you no longer have the right to be involved in government. This type of rhetoric, this type of cartoon, would never be tolerated if the target were Muslims or Jews. I suspect that we will only see this type of rhetoric escalate if any other supreme court decisions chip away at the sacrament of the left.