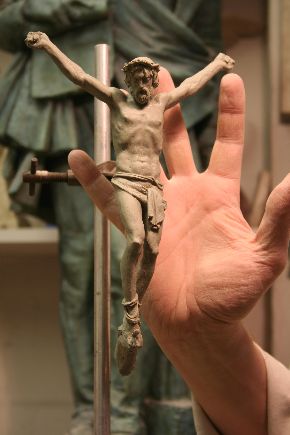 Over the next few weeks I’ll be posting some examples of work by some of the artists and architects leading the renewal of the liturgical arts. Contrary to popular belief, there is a lot of good work being done out there. Alexander Stoddart is the first to be profiled here on Creative Minority Report. Stoddart resides in Scotland and is a man of the 21st century with roots as deep as the history of sculpture itself. He was chosen to sculpt the official portrait for Queen Elizabeth’s 50th anniversary and has done significant work in the Queen’s Gallery of Art.Though most of his work has been in monumental secular designs, like his great Millennium Gate in Atlanta, his skill transfers over beautifully to liturgical imagery. His works are singular pieces, designed on commission, but some reproductions are available. Though rooted deeply in the classical tradition, Stoddart’s work is lively, fresh and inspired. Images shown here: corpus for a processional crucifix, St. Nicholas of Tolentino, and the Annunciation. He is also currently working on a portrait bust of Pope John Paul II for the University of Saint Mary of the Lake/Mundelein Seminary in Chicago, which is still under wraps. Convince your pastor to patronize the real arts, not mass-produced copies from church furnishings catalogs!