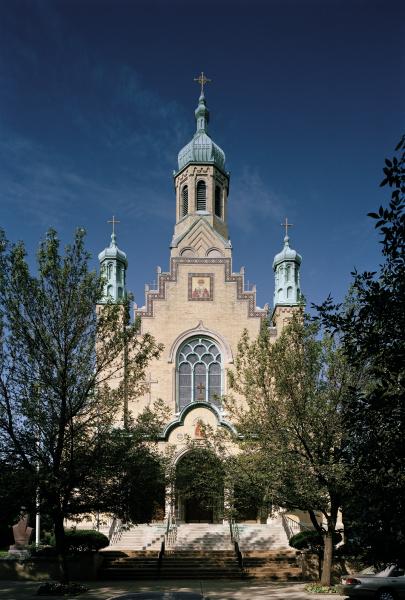 Not to leave our Eastern-Rite brethren out of the church of the day series, today’s spotlight falls on Chicago’s Ukrainian Catholic Cathedral. It was designed by local architects Worthmann and Steinbach (one of whom was Lutheran) but uses an interesting blend of eastern and western traditions. The church was inspired by the Cathedral of Santa Sophia (Holy Wisdom) in Kiev, Ukraine, and shows the deep architectural theology of the eastern rites. The primary consideration is that the building is an image of a restored earth and heaven, where the victory of Christ and human cooperation means that all traces of chaos and sin are removed. The nave interior shows floral motifs reminiscent of the Garden of Eden and the Temple of Solomon. The blue starry sky in the ceiling with saints shows that we earthly worshipers are acting together in our praise of God with the heavenly beings as well as the cosmos, which praises God in its orderly orbital movement through the heavens. The sanctuary shows the Virgin as an image of the Church as bride, coming to meet its bridegroom, Christ. Beneath her is the “Mystical Supper” where the usual linear notion of time is suspended to show Christ in two places at once, offering both the Blessed Sacrament and Precious Blood to the apostles, who approach Him in dance-like poses suggesting the graceful perfection of their heavenly state. The dome over the church speaks of God’s “circular” movement (a circle has no beginning and no end) in “walking” with us in the liturgy. We Latin-rite Catholics could learn a lot from our eastern friends, which is why Pope John Paul II wanted the church to breathe from “both lungs” of east and west. This church and all the building in the “church of the day” series are from the book Heavenly City, The Architectural Tradition of Catholic Chicago, available at the link to the left.