Tabernacle Back Where It Belongs 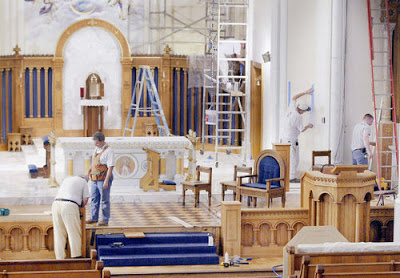 Renovations at the Cathedral of St. Mary in Fargo North Dakota include moving the tabernacle back from the side altar to the center of the sanctuary and adding a communion rail.

“In my mind, we’re putting the blessed sacrament back where it should have been in the first place,” said John Herlick, vice chairman of the St. Mary’s parish council.

Many churches moved their tabernacles to a side location or a separate chapel after the Second Vatican Council of the 1960s. Now some are moving it back.

Carpenters, painters and electricians are currently hard at work on the renovation project of the altar area. The changes include a new pulpit and railings in front, an extension of the marble floor by the altar, moving the tabernacle to the center of the rear wall behind the altar and moving the bishop’s chair to the left side of the altar.

Of the tabernacle movement, Rev. Chad Wilhelm, rector of St. Mary’s said: “It’s the center of our faith,” said the . “I’ve had nothing but people very, very overjoyed about (moving it to the center).”

Total costs will be about $200,000, Wilhelm said. It’s paid for out of a renovation fund started from the estate of Cardinal Aloisius Muench, who was bishop of the diocese from 1935 to 1946.

The construction completes an extensive refurbishing done in 1996. It also is a prelude to further renovations on the south side of the 108-year-old cathedral in the next five years.

Wilhelm said this project will create a more accessible entrance, with an improved elevator and bathrooms on the main floor. The project may also include adding a chapel for perpetual adoration of the Eucharist.

“It brings pride to the people when things are kept up and clean and cared for,” Wilhelm said. “It’s God’s temple, but it’s their church home.”